Mixed signals on coffee and rice

Mixed signals on coffee and rice 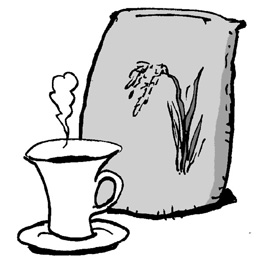 A good intention does not necessarily guarantee a good result. As recounted in “Filthy Lucre: Economics for People Who Hate Capitalism” by Joseph Heath, in the early 1990s, cosmetics maker The Body Shop paid more than the market price when purchasing shea butter produced in Ghana. The purchase was a part of an initiative called “Trade Not Aid,” a fair trade campaign promoted by the cosmetics company.

But the aftermath of all that good will was devastating.

African farmers were swept away by the shea butter craze, and production volume increased 10 times, from two tons to 20 tons in just a year. Shea butter production was four times higher than the initial order from The Body Shop. Farmers had misinterpreted the high price as a signal for increased demand and ended up wasting their valuable time and effort.

Now there’s a risk that the fair trade coffee movement could be headed in the same direction. The movement gained momentum in the early 2000s when coffee prices plummeted from $3 per pound to less than 50 cents.

Advocates of fair trade insisted that importers needed to pay more for coffee to keep the price from dipping further. But that was only a temporary solution.

The total demand for coffee beans around the world was 150 million 60-kilogram bags at the time, and a surplus of 10 million bags was the fundamental cause of the price drop.

Paying higher prices for coffee when production should drastically be cut is a counter-incentive. Oxfam, an international organization that seeks solutions for famine and poverty, realized the error in logic and made a more realistic suggestion. In its coffee industry rescue plan, Oxfam proposed that developed countries chip in about $100 million to buy and destroy 5 million bags of coffee.

Meanwhile, in Korea, in order to prevent rice prices from collapsing this fall, the Korean government is about to purchase the surplus of 1.14 million tons of newly harvested rice. That will temper the fire for now, but it cannot serve as a lasting solution. Each citizen consumes less than one sack of rice per year, but our stores of rice are piling up by the year.

Fortunately, coffee prices are now on the rise, as consumption is growing in China and India and production has decreased due to changes in climate. In the end, the rice problem can only be solved when demand grows or production is reduced.

If the government keeps buying all the surplus crops, rice production is not likely to decrease. And I’m afraid that if the government continues to send the wrong signal, it may someday need an Oxfam-style solution.