A STRATEGY BEGINS TO FORM
Allied forces go on offensive

Last week, General Paik embarked on his first attack, on Mount Palgong, in an effort to advance north and provide support for the incoming troops at Incheon. 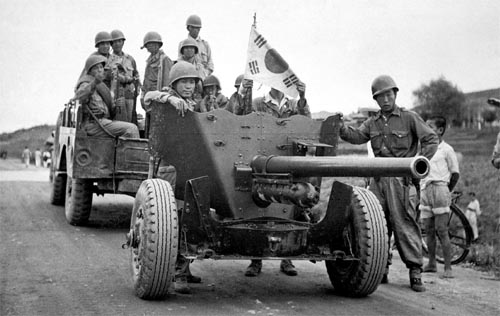 The allied forces aggressively march north after defeating enemy forces at the Nakdong line on Sept. 18, 1950. ROK Army officers, heading north towards Suwon, pose in front of a 37mm anti-tank gun. Provided by the U.S. National Archives and Records Administration

It was Aug. 17 when I got a visit from Gen. Walton Walker. We had been eagerly awaiting our chance to start our counter-offensive, but heavy rainfall had prevented us from doing so. It was at this time when General Walker, in his shiny combat helmet, stepped out of his jeep.

Without a moment’s hesitation, he asked, “General Paik, have you heard of the bypass strategy?”

As General Walker explained, the bypass strategy was taught at the U.S. Army Command and General Staff College. The strategy consisted of attacking our enemy head on and when we hit the strongest link in the enemy’s defensive line, we were to shift our focus and look for another or weaker route, in an attempt to penetrate the enemy’s line.

“You should consult with your commanding officers to discuss how to penetrate the weak point in the enemy’s defensive line,” said General Walker.

It was not easy to determine the weakest link in the enemy’s defensive effort at the Nakdong line. The enemy forces had placed a large majority of its personnel and firepower into the area in a last ditch effort to win the war. I would need capable men to determine the point of attack.

I gave an order to 12th Regiment Commander Kim Jeom-gon to penetrate a hole in the Nakdong line.

The allied forces conduct a major counteroffensive on Sept. 18, 1950, along the Nakdong River. U.S. Army soldiers inspect their equipment prior to going to the front line. Provided by the U.S. National Archives and Records Administration


Colonel Kim was a very trusted man and was fully capable of carrying out some of the most important missions. He was an excellent shot, and despite his small stature, his presence and bold nature made him an ideal commander. An intelligent man, he also had the capability to formulate effective strategies as a regimental commander.

As I expected, Colonel Kim penetrated the enemy’s line on the afternoon of Sept. 18. I received a call from Colonel Kim at the Division Headquarters stating he had advanced to the Geumaedong area. I was surprised to hear that the area was located approximately 12 kilometers (7.5 miles) to the north of Dabudong. He had managed to advance deep into enemy territory.

I rushed over to the 12th Regiment and asked Colonel Kim how he had managed to achieve the feat. As the colonel explained, he first shelled the area of entry for roughly 10 minutes using U.S. artillery guns. After the initial shelling he gained a foothold in the area with infantry soldiers. He then continued to shell further into enemy territory and had his men follow the path and advance further.

The reason why the ROK Army was able to successfully carry out its mission - like the one involving Colonel Kim and his 12th Regiment - was because of the impressive firepower provided by Colonel William Hennick and his Field Artillery Regiment. It was an exemplary case of the infantry and artillery units working in unison. It was also possible largely because of Colonel Kim’s bold and precise nature.

I received two calls from General Walker, who himself seemed surprised to hear of the news and offered us plenty of praise for successfully completing the mission.

“How did you manage to penetrate the enemy’s line?” asked General Walker. “You executed a very impressive mission.”

I proceeded to order the 11th and 15th Regiment to make a detour and attack. The U.S. 1st Cavalry Division, which put up a valiant effort against the enemy forces at Waegwan and Hakmyeong-dong, received orders to provide us with support and started to move in from the west.

I stuck with the ROK 12th Regiment and their movement up north.

The enemy’s 1st and 3rd Divisions and 13th Regiment in the Mount Gasan and Waegwan area were now facing the gloomy prospect of attacks from allied forces from both sides. From what I saw in moving with the 12th Regiment from the southern to western region, I could see that the enemy had crumbled under the pressure of our attacks. Corpses of the enemy’s military horses were strewn around on roadsides, along with vehicles and artillery guns. Numerous enemy corpses were found on mountain trails in the surrounding areas.

The successful defense of the Nakdong line, followed by another successful counter-offensive involving the ROK 1st Division and 12th Regiment, were the instrumental battles that turned the tide of the war.

Colonel Kim of the 12th Regiment played a key role in those battles. I considered myself lucky to have had the opportunity to work with such a capable commander.

As I continued westward with Colonel Kim and his 12th Regiment, the roadside scenery was much the same. It was common to see enemy corpses and weapons scattered about. The enemy forces, which had been involved in fierce battles along the road merely days ago, were now nowhere to be seen. It was speculated that the enemy troops had fled into the mountains.

We soon reached a point north of Dabudong that served as the point connecting Sangju, Ansung and Daegu. Col. Choi Young-hee of the ROK 1st Division, 15th Regiment and Gen. Hobart R. Gay, commander of U.S. 1st Cavalry Division were also there.

With the ROK 12th Regiment’s successful penetration of enemy forces along the Nakdong line, other ROK and U.S. troops had been advancing north past the Nakdong line. General Gay and his men were continuing their march up north towards Seoul. Colonel Choi was excited about advancing north and I was overcome with the feeling that the allied forces would go on to win the war easily. However, I could not brush aside strange feelings of doubt that were starting to creep into my mind.

The next day, I stepped out of our Division Command Post and rushed our men to move on to our next destination, Cheongju, North Chungcheong. With only one other military police jeep trailing mine, and always the danger of enemy forces hiding out in the nearby mountains for an ambush, it was not the safest way to travel, but we arrived in Cheongju within few hours without any problems.

We located a U.S. Artillery unit in the downtown area of Cheonju and approached them. Col. Marcel Crombez of the U.S. Cavalry 1st Division, 5th Regiment, was there. We also met platoon leader Ko Byung and his men, who had been sent ahead to act as the ROK 1st Division’s reconnaissance team.

“We got the word that Kim Chaek, the commander of the enemy troops on the front lines, was fleeing Jochiwon,” said Ko.

General Kim had worked closely with Kim Il-sung in their resistance efforts against the Japanese colonial regime and was appointed No. 2 committee vice chairman in the North Korean Workers’ Party. He would go on to earn the title of industry minister and deputy prime minister under Kim Il-sung in 1948 and the title of commander of the North Korean troops on the front lines during the Korean War.

I pushed him to describe the situation in further detail and he stated: “It looks like he is passing Jochiwon in his vehicle at this point.”

I briefed Colonel Crombez on the situation and requested that he shell the area where General Kim was believed to be. I advised that it would be wise to focus on Jochiwon Station and shell the surrounding areas. The U.S. 155mm artillery guns started to fire around 6 p.m.

I found out at a later date that General Kim was not hit by any of the shells at the time and safely returned to the north. He reportedly died of a heart attack in January 1951. At the time, I was anxious to capture or kill one of the top commanders of the enemy forces. I could not sit idly while he fled the nearby area.

I still have regrets over our inability to capture General Kim that day.

I returned to the 1st Division Command Post at Osang Middle School in Gumi, North Gyeongsang, later that day. Other commanders at the CP were unaware of my trip to Cheongju, and while they were busy discussing the next battle plan, I was consumed with the thought that we were not being aggressive enough in our counteroffensive. Even with strong artillery support from the Americans, we were sitting around merely planning possible attacks. It seemed to me like a waste of valuable time.