Calming the fires on our planet

Calming the fires on our planet 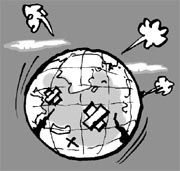 The Earth is enraged. The arctic glaciers in Greenland are melting; dormant volcanoes such as the Eyjafjallajokull in Iceland and Mount Sinabung in Indonesia, erupted; great earthquakes rumbled through Haiti and New Zealand; intense heat, the hottest in 112 years, scorched Japan; and, three typhoons in a row - Dianmu, Kompasu and Malou - have hit the Korean Peninsula in one month.

This year, there are abnormal, record-breaking changes in the weather everywhere you look - in the North and the South Pole, in the Northern and Southern Hemispheres and in the East and West. All of this has given us the feeling that we are living a sci-fi movie.

The Earth is bleeding to salve its festering wounds. There is no way to explain this other than to say that we humans have brought these catastrophic changes upon ourselves with our indiscriminate use of fossil fuels and greenhouse gas emissions.

In his 2006 documentary “An Inconvenient Truth,” former U.S. Vice President Al Gore emphasized that it will not be possible to revive the Earth if we do not reduce fossil fuel consumption immediately. We need an alternative to oil and gas, synthetics and plastics.

That’s a fine notion, but we may already be beyond the point where we can solve the problem with a pledge like the one Martin Luther made when he said, “Even if I should learn that the world would end tomorrow, I would still plant this apple tree today.”

Scientists are now turning to geo-engineering to manipulate the climate to temper the effects of global warming. They found a clue following the eruption in 1991 of Mount Pinatubo, an active volcano on Luzon Island in the Philippines. They discovered that the Earth’s temperature had decreased because the enormous amount of ash from the volcano created a haze of sulfuric acid droplets, which in turn decreased the amount of sunlight in the area.

It has been reported that Intellectual Ventures, a private company claiming to invest in “pure invention,” plans to launch “a garden hose to the sky.” They intend to spray liquefied sulfur dioxide from a base station, which is fixed by a helium gas-filled balloon, through a 29-km-long hose stretching from the ground to the stratosphere. The firm estimates that construction of the device will take about three years; it has an initial investment of about $150 million and an annual budget of around $100 million. Opposition from environmentalists could prevent the project from being realized. But it’s nice to know that people are still trying.

If we have confidence in the human race, which has responded to many of the challenges nature has thrown our way, I think we will find a solution to global warming. I look forward to the day when South Korea, which has a policy of “low-carbon green growth,” participates in a huge scientific project like this.