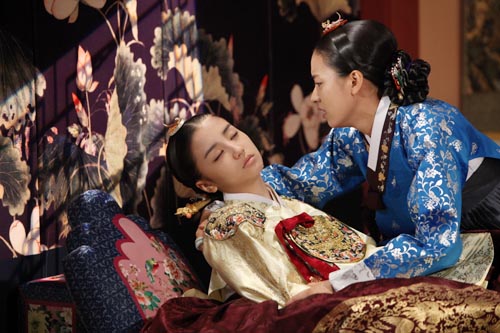 MBC’s popular period drama ‘Dong Yi,’ seen in the photo above, was almost cancelled after its actors went on a three-day strike, protesting that MBC owed them pay. Provided by MBC


MBC’s popular period drama “Dong Yi” was almost canceled this week when its actors refused to work for three consecutive days, protesting that they had not been paid.

Some of the actors featured in the drama, who are also members of the Korea Artist Union for Broadcasting, Film and Performances, did not show up for work from last Friday to Sunday, saying that MBC owed them a total of 2.16 billion won ($1.84 million) in back pay.

After MBC refused to make the payments, the actors and other members of the union walked off the set of four MBC dramas, including “Dong Yi,” “Gloria,” “Kim Su-ro” and “Naughty Kiss.”

On Monday, the Dong Yi actors returned to work, following a settlement with the Leaders Contents Company, an outsourcing company responsible for its production, which delivered all of the payments to the actors.

“We have given the actors their payment for July’s work, which was delayed due to a paperwork problem,” said Lee Se-jung, head of the outsourcing company. “We have also given them their August payment, which we were supposed to have paid Sept. 10.”

But the threats by the actors has raised larger questions about the broadcaster-outsourcing system, which started in Korea in 1991. Industry experts say that since the global economic crisis began in 2008, the system has suffered from declining production budgets because of a decrease in exports of Korean dramas and an increase in the number of dramas sold off at excessively low prices.

Last Wednesday, the Korea Artist Union held a press conference at MBC’s headquarters in Yeouido, Seoul, with union leader Kim Ung-suk and 20 actors from the union present. They claimed that the three major broadcasters, MBC, SBS and KBS, owe the actors 4.37 billion won as of the end of July for their appearances in various drama series.

Right before the conference, the union finished negotiations with MBC. Still, the actors said that they would not participate in the production of 10 scheduled dramas for MBC and SBS, including “Dong Yi” and “Giant,” which headline the networks’ broadcast lineup.

Strictly speaking, however, the payments from the dramas in question actually come from outsourcing companies that the broadcasters hired to produce the dramas. The KBS drama “Sing the National Anthem,” MBC’s drama “Iljimae Returns” and the SBS drama “Coffee House,” were all produced by outsourcing companies hired by their respective broadcasters, and the actors in these dramas signed contracts with those companies directly.

Although the actors openly acknowledge the existence of this system, they have continued to blame the broadcasters for missing payments and other problems.

“[The broadcasters] have given these outsourcing companies ridiculously small production budgets so they can earn as much profit as possible,” Kim said.

Representatives from MBC retaliated by saying that it is unrealistic to expect broadcasters to monitor all of the financial transactions for which the outsourcing companies are responsible.

“As a broadcaster, it is nearly impossible to control all of the payment transactions between the production company and the actors, or the financial feuds that go on during production,” MBC said.

With regard to the actors’ refusal to work, MBC said it was regrettable that their actions had interfered with the production process.

KBS and SBS also agreed to a compromise settlement with the union this week.