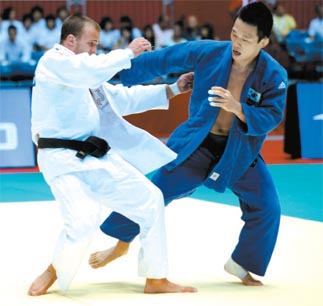 Wang Ki-chun, right, competes against Ugo Legrand of France during the quarterfinal match of the world championship on Saturday. [AFP/YONHAP]

Wang Ki-chun failed to defend his world title but Kim Jae-bum earned his first world title of his career at the 2010 World Judo Championships over the weekend in Tokyo.

Wang entered the tournament having won back-to-back world titles at the 2007 Rio de Janeiro and 2009 Rotterdam World Championships. As the top-ranked judoka in the 73-kilogram (161 pounds) division, Wang was expected to win his third consecutive title. The 22-year-old cruised through the early rounds of competition at the Yoyogi National Gymnasium on Saturday before suffering a tough loss to Hiroyuki Yakimoto of Japan in the semifinals.

He had defeated Yakimoto in the finals at the Paris Grand Slam in February.

Yakimoto looked prepared for Wang this time around as he effectively prevented Wang’s attacks. Yakimoto also used his strong ground game to his advantage as he pressured Wang on several occasions throughout the match, which seemed to wear down Wang as the match wore on.

With the match ending on a scoreless draw after five minutes of regulation and extra time, Yakimoto was awarded the winner of the match based on the decision of the referees. Wang managed to defeat Mansur Isaev of Russia for a bronze medal.

A day earlier, Kim earned his first world title and in the process, gave Korea its first gold at the 2010 World Championships.

Kim earned a waza-ari, or a half-point, for a throw on Leandro Guilheiro of Brazil in the finals to live up to his world No. 1 ranking.

Kim first made a name for himself at the 2004 World Junior Judo Championships in Budapest, Hungary, winning a gold medal in the 73-kilogram division.

But with world-class judokas like Lee Won-hee and Wang competing in the same weight class, Kim moved up to the 81-kilogram division in 2007.

Consistently ranked among the top three in the 81-kilogram division, Kim came up short at several big international tournaments in the recent past.

Kim came up short against Ole Bischof of Germany at the 2008 Beijing Summer Games to earn a silver medal and settled for a bronze at the 2009 World Championships in Rotterdam, Netherlands, after suffering a broken rib in earlier rounds.

Choi Min-ho of the 60-kilogram division crashed out in the first round and Jang Jin-min was eliminated in the second round while Kim Joo-jin and Ahn Jung-hwan also failed to get past the early rounds yesterday. Competitors in the open categories will clash today.