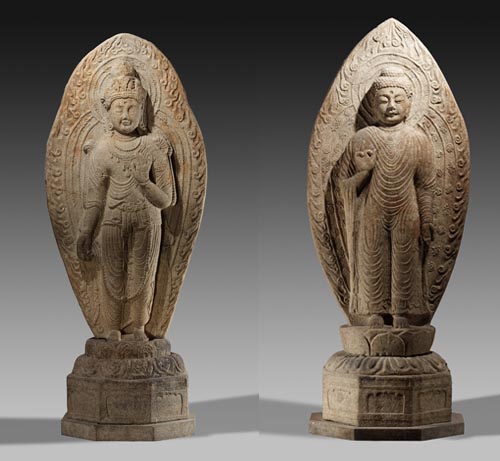 Name: Maitreya Bodhisattva and Amitabha Buddha, from the monastic site of Gamansa


In 1915, the stone statues of the Maitreya Bodhisattva and Amitabha Buddha were brought from Gamsansa, a Korean Buddhist temple in Gyeongju, which was established during the Unified Silla Dynasty. The back of the statues feature detailed carvings that describe their purpose.

According to the inscription, both of these statues were dedicated by a Silla official, Kim Ji-seong, in memory of his deceased parents. They were also meant as an expression of his gratitude and respect towards King Seongdeok. Displaying delicate lines and features, the Amitabha Buddha figure stands upright, wearing a stern expression, while the Maitreya Bodhisattva bends slightly at the waist, wearing a benevolent smile. These statues are representative of the high standard for stone carvings that existed during early 8th century Unified Silla.