Durant does the deal: U.S. winners in Turkey

Durant does the deal: U.S. winners in Turkey 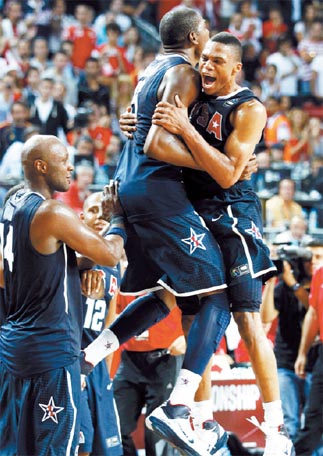 Lamar Odom, Kevin Durant and Derrick Rose of the U.S., left to right, celebrate their victory against Turkey after their FIBA Basketball World Championship game in Istanbul on Sept. 12. [REUTERS/YONHAP]

ISTANBUL - World championship favorites, the United States, ended a long wait by beating Turkey 81-64 in the championship final on Sunday to win their first title in 16 years, thanks to inspirational forward Kevin Durant.

Still only 21 and coming off his third professional season, the Oklahoma City Thunder prodigy won the tournament’s Most Valuable Player award with a series of majestic performances.

Easing past defenders to score from a wide range of positions, Durant racked up 28 points in the final, including 20 in the first half after the hosts took an early 17-14 lead.

Durant buried one 3-pointer after another to give the U.S. a 42-32 halftime lead and his Oklahoma City teammate Russell Westbrook provided excellent support with 13 points, six rebounds and three assists.

“I am happy to come home with a gold medal and I was blessed for such a coach as Coach K,” said Durant, referring to U.S. coach Mike Krzyzewski, who also steered the Americans to the 2008 Olympic gold medal.

“I was put in a great position to come here and be one of the main players. I took the challenge and it was a tough task to prepare for the international game.

“Calling us a B-team was great motivation because [that label] was coming back from the United States,” added Durant, who emerged as the team leader through the absence of household names such as Kobe Bryant and LeBron James.

Los Angeles Lakers center Lamar Odom chipped in with 15 points and 11 rebounds as the United States dominated in all departments, collecting 42 rebounds and forcing 14 turnovers. Phoenix Suns forward Hedo Turkoglu, who limped to the dressing room after a first-half collision, returned with his strapped knee to lead Turkey with 16 points and seven rebounds.

Although they were outclassed by an athletic U.S. team superior in individual skill and ability, the Turks still had plenty to cheer about after securing a maiden podium finish in their third world championship.

They got a standing ovation from the passionate home fans in the Sinan Erdem Dome, which had put the wind in their sails in every match during their 8-0 run leading up to the final.

But the Turks had no answer for Durant and seemed sapped of energy after Saturday’s dramatic semifinal win over Serbia, when they scored at the buzzer to turn looming defeat into victory.

“No one expected us to get this far when the tournament started and I was proud to be the captain of this team as I was honoured to be a part of it,” said Turkoglu.

Lithuania, brushed aside by the U.S. in the other semi-final, bounced back to win bronze with a 99-88 win over Serbia earlier on Sunday.

Versatile forward Linas Kleiza shone with 33 points for Lithuania, which will host next year’s European championship.