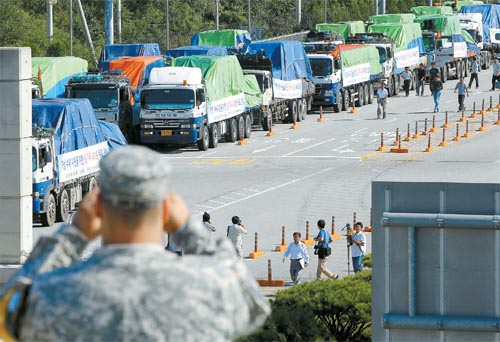 Trucks loaded with sacks of flour for North Koreans yesterday cross the inter-Korean border as a UN soldier stands guard at the Customs, Immigration and Quarantine Office near the Demilitarized Zone in Paju, Gyeonggi. South Korean provincial and civic groups said they sent 530 tons of flour to help ease food shortages in the North, which was hit hard by flooding during a recent typhoon. [YONHAP]


North Korea proposed working-level military talks for next Friday in Panmunjom, according to the South’s Ministry of National Defense yesterday. The move follows other recent actions suggesting a thaw in relations between the two Koreas, but the South Korean government said it was taking time to consider the latest request.

The proposal, which was sent by fax using a military line, requested discussions on the Northern Limit Line and a plan by South Korea to send anti-Pyongyang leaflets into North Korean territory.

The requests were made in regard to a joint military agreement between the two Koreas in 2004 to prevent military clashes in the Yellow Sea, site of the Northern Limit Line, and an earlier agreement from both countries to stop disseminating propaganda.

The Northern Limit Line, the de facto maritime border between the two Koreas, has been disputed by the North, which says it should be moved farther south. It has been the site of deadly naval skirmishes between the two countries in 1999, 2002 and 2009. The two Koreas are still technically at war.

South Korea announced a plan in May to send anti-North propaganda leaflets into the North by balloon, following the sinking of a naval warship Cheonan in March, but the plan was deferred.

South Korean officials said they were studying the talks proposal, but some were skeptical of the agenda, saying the issues are “complex.” If the request is accepted by the South, it would be the first round of working-level military talks since Oct. 2, 2008.

“We are looking carefully at the request and taking into consideration that there has not been any movement from the North to acknowledge or apologize for the sinking of the Cheonan,” said a Defense Ministry official who asked not to be named. Seoul and Washington blame Pyongyang for the ship’s sinking, which the North denies.

Some government officials said the talks were likely to be “fruitless” and the request will likely to be rejected.

Officials also said they were puzzled by mixed signals from Pyongyang. After requesting flood relief aid and an offer to hold reunions of families divided between the two Koreas, North Korea lambasted the South Wednesday for its final report on the cause of the Cheonan’s sinking.

North Korea’s Committee for the Peaceful Reunification of the Fatherland called the report “a provocation that cannot be tolerated,” according to North Korea’s state-run news agency. It went on to state that the “puppet regime tries to save face in publicizing its final report against public sentiment and pushes for confrontation, but the more they push, the more their plotting ways are uncovered.”

Representatives of South and North Korea will meet today in Kaesong for a first round of working-level talks since the sinking of the Cheonan to discuss inter-Korea family reunions.