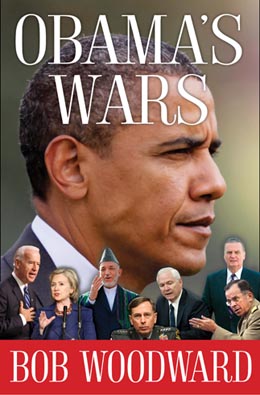 WASHINGTON - The White House on Wednesday sought to limit any fallout from a new book that chronicles bitter infighting among President Barack Obama’s aides who helped craft his Afghan war strategy, with some doubting it can succeed.

The book by veteran Washington Post journalist Bob Woodward, “Obama’s Wars,” portrays Obama’s national security team as deeply divided over Afghan policy during much of the past 20 months even as U.S. public support for the war waned.

Though it will not be in bookstores until Monday, excerpts published in major newspapers helped generate considerable buzz in Washington and across the blogosphere and could fuel skepticism among lawmakers who control military funding.

The White House did not dispute Woodward’s account but played down the internal rifts he details and insisted that when the book is read as a whole Obama comes across as a decisive, analytical leader in last year’s policy review.

“The president shepherded through a process. It was thoughtful and deliberate,” Obama spokesman Robert Gibbs said. “There was also a robust discussion about how important it was and in our national interest not to become involved in something in Afghanistan that was unlimited or open-ended.”

The book comes out five weeks before pivotal congressional elections, but any significant impact appears unlikely since Afghanistan has drawn little attention on the campaign trail with voters mostly focused on economic concerns.

Still, Woodward - who has made a career of putting presidents on the hot seat - paints what is not always a pretty picture of the inner workings of Obama’s war council, including scathing personal sniping about one another.

Obama, in excerpts of the book, is shown at odds with top military commanders, particularly Admiral Mike Mullen, the chairman of the Joint Chiefs of Staff, and General David Petraeus, now the commander of U.S. and NATO forces in Afghanistan, during a 2009 policy review when they wanted to add more troops in Afghanistan than he wanted to send.

Obama, who is said to have pressed military advisers for an exit plan that they never gave him, decided on a 30,000-troop buildup but included a pledge to start drawing down forces in July 2011.

“I can’t lose the whole Democratic Party,” Obama is quoted as saying. He campaigned for the presidency on a promise to shift the military focus from Iraq to Afghanistan but is also mindful of the political risks of getting bogged down there.

Richard Holbrooke, Obama’s Afghanistan envoy, is quoted as saying of the president’s strategy, “It can’t work.” Lieutenant General Douglas Lute, White House adviser on the war, is said to have believed the outcome of the review did not “add up.”

Asked about those doubts, a senior administration official said, “Everybody on the president’s team signed off on the Afghan strategy, and is focused on implementing it.”

Marine Colonel David Lapan, a Pentagon spokesman, said, “The department is fully focused on the mission at hand in Afghanistan and implementing the president’s strategy there.”

The White House gave Woodward, an investigative journalist who rose to fame reporting on the Watergate scandal that led to the resignation of President Richard Nixon in 1974, broad access despite the risk of a less-than-glowing assessment.

The book describes Obama as a “professorial president” who assigned “homework” to advisers but who bristled at what he saw as military commanders’ attempts to force his hand.

In what could undermine efforts to ease relations between the Obama administration and Afghan President Hamid Karzai, the New York Times said the book discloses the United States has intelligence showing Karzai suffers from manic-depression and is on medication. There was no immediate reaction from Kabul.

Among excerpts in the Times and the Washington Post:

* A variety of administration officials expressed scorn for Obama’s national security adviser, James Jones, while he referred to some of the president’s aides as “the water bugs.”

The Times said the book also discloses that the CIA has a 3,000-man “covert army” in Afghanistan comprised mostly of Afghans who capture and kill Taliban fighters and seek support in tribal areas.