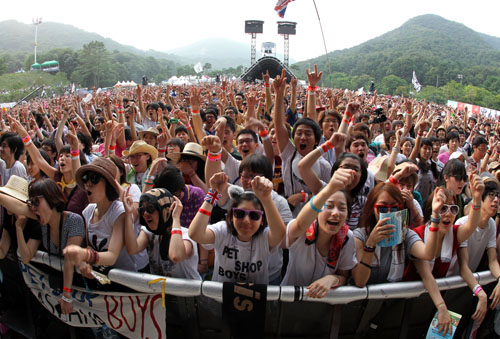 Nanji Island, a landfill on Seoul’s Han River, seems an unlikely venue for one of the most famous events in global dance music. But for one weekend in October, that’s what it will be.

On this usually quiet parkland in the Mapo area of Seoul, thousands of music lovers will congregate at the GlobalGathering dance festival to whoop and grind, well into Sunday morning, to thunderous dance music served up by superstar DJ Fatboy Slim, French electro duo Justice and a host of top local DJs.

A few years ago, the notion that a world-renowned dance music festival would take place in Seoul would have seemed outlandish. Though smaller festivals did exist for Korean bands, as recently as 2005 Korea didn’t have a single large-scale international rock or dance festival to its name, and was lucky to see four or five big acts play the country in a year.

Just five years later, however, and the summer has been clogged with festivals, with some offering at least that number of international acts over a single weekend. From a live music backwater, Korea has developed a festival scene that is perhaps second only to Japan’s in Asia. But how, in the span of just a few short years, has it come to this?

Jimin Euncil Lee, of local promoter I-Yescom, has a broader perspective than most on the rise of Korea’s international rock festivals. Five years ago Lee was part of the team that staged the inaugural Pentaport Rock Festival in Incheon, an event that is still running today. Coming seven years after I-Yescom’s predecessor Yescom had attempted to stage Korea’s first international rock festival, Triport - which had sunk under an onslaught of typhoon rains, virtually ruining the promoter in the process - the first Pentaport boasted a line-up including Franz Ferdinand, the Black-Eyed Peas and Snow Patrol, kick starting the trend toward the bigger, more ambitious events Korea is seeing today.

“When we held the first Pentaport in 2006, we had to write manuals explaining what a rock festival is and why the tickets are all different - one day, two days and so on,” she says.

For Lee, timing was a crucial part of festivals’ subsequent success in Korea.

Mark Russell, a long-time cultural critic and the author of Pop Goes Korea, also believes the last few years presented an opportune time for festivals to grow. “There is no money to be made any more in CD sales, but companies still recognize that music is really popular and a good way of getting your name out in a ‘hip’ context,” he says.

Yenny Shin, a visual merchandiser and veteran of more than 10 Korean festivals, agrees. “Ten years ago, listening to rock music was the preserve of hardcore fans,” she says. “But as the Internet grew and more young people spent time overseas, they became more culturally savvy. The festival culture was an outgrowth of that.”

Whatever its exact causes, Korea’s rock festival scene has boomed. This year’s biggest events have attracted tens of thousands of fans to see a roster of Korean bands, including indie stars, plus some of the biggest international acts out there.

Yet for all their recent success, Korea’s rock festivals have been far from problem-free.

A few events were announced to great fanfare, only to be suddenly canceled. In 2009, a disagreement between Pentaport’s joint promoters led to a schism that saw the two biggest festivals, Jisan and Pentaport, being staged on the same weekend.

As even a cursory glance shows, the line-ups at Korea’s festivals remain very shallow compared with established events in Japan, Europe and North America. And despite some large crowds, profits have been elusive.

“Many Koreans still believe that festivals should be free,” says Lee. “We still operate on a deficit budget, so even though fans expect more every year, we can’t keep improving our line-up. This is the vicious circle we find ourselves in.” Yonhap