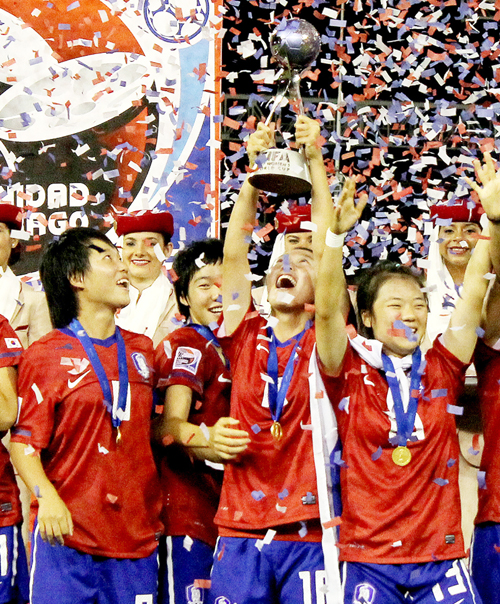 Facing off against archrival Japan in the U-17 Women’s World Cup finals in Port of Spain, Trinidad and Tobago, the match lived up to the pregame hype as the two sides traded blows in an action-packed game. A 3-3 tie after 120 minutes of play was broken after Korea managed to win the tournament in thrilling fashion in a penalty shoot-out.

“It all feels like a dream,” said manager Choi Duck-joo in a postgame press conference. “I believe we were able to win today because our players refused to give up to the end and played their hearts out.”

Earlier in the day, Spain defeated North Korea 1-0 to secure third-place in the tourney. Raquel Pinel scored the lone goal of the match in the 65th minute and that’s all the European champions needed.

With much of the Korea-Japan pregame hype focused on Yeo Min-ji, Japan did a respectable job of containing the forward, who would win the Golden Boot and the Most Valuable Player at the postgame ceremonies. But it was her teammates who provided timely goals for Korea.

Lee Jung-eun opened the scoring with an impressive volley from roughly 23 meters (25 yards) out just six minutes into the match to give Korea an early lead. It did not take long for Japan to respond, as Hikaru Maomoto and Yoko Tanaka countered with two quick goals in the 11th and 17th minutes, respectively, to give Japan a 2-1 lead.

With Korea facing the prospect of heading into halftime with a one-goal deficit, captain Kim A-reum connected on a free kick one minute into added time to level the game at the 46th minute.

Japan took the lead again in the 57th minute off Chika Kato’s goal but Lee So-dam, who was substituted into the game at the 78th minute, scored in the 79th minute to push the game into extra time.

Korean players looked fatigued in extra time, failing to muster much of an attack as Japan set the pace, but the game could not be decided in extra time.

The penalty shoot-out proved to be every bit as exciting as the match itself, as the two sides tied at four goals apiece after the first five kickers. In the sudden death portion of the penalty shoot-out, Japan’s Tomoko Muramatsu hit the crossbar. Then, with Korea’s first international title on the line, defender Jang Sel-gi calmly scored to send the Korean players and coaching staff into a wild frenzy.

President Lee Myung-bak called to congratulate the team. “I watched the semifinals and the finals and you did a good job and I could see that the players gave it their all,” said Lee in a telephone conversation with Choi. “The people of Korea are joyous about our young girls winning the international tourney today.”

Korea’s first women’s national football team was formed ahead of the 1990 Beijing Asian Games, and its members consisted of a mix of players from field hockey and other teams.