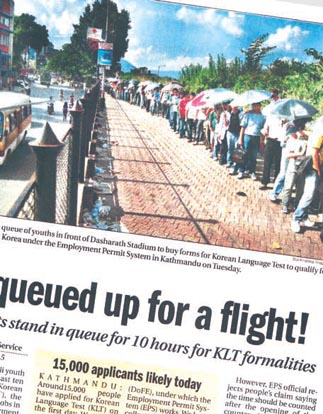 Approximately 15,000 Nepalese line up to apply for the Test of Proficiency in Korean in June, according to this story in The Himalayan Times on June 15, 2010. [JoongAng Ilbo]

People in South and Southeast Asian countries are lining up to take the Test of Proficiency in Korean, or TOPIK, to get jobs in Korea. The test is an increasingly important factor in determining whether they can obtain permission to work here.

Last month, in Nepal, 36,203 people lined up to apply to take the test, according to local newspapers in Nepal. Applicants paid an enrollment fee of about $17, almost one quarter of the average monthly wage in the South Asian country, and some waited for 10 hours or more to submit applications, the reports said.

It was also reported that vans distributing test papers to 27 different centers were accompanied by patrol wagons dispatched by Nepali police.

“If I had worked in Saudi Arabia [instead of in Korea], I wouldn’t have been able to earn more than $150 per month,” said Gambir Gureung, a Nepali citizen who worked in Korea from 1991 to 1999. “But Korean companies paid me about $1,000 to $1,900 dollars a month and taught me practical skills as well, which helped me buy a house and start a business in Nepal.”

The TOPIK, which was launched by the Korean government in 2005, consists of grammar, writing, reading and listening sections of 25 questions each.

The number of applicants for the test has been rising in recent years.

There are already 27,618 applicants registered in Sri Lanka for next month’s test, while 29,583 people have applied to take the test in Vietnam. There were 2,426 applicants in Indonesia for this month’s test, which was a higher number than expected given that the test was administered during Ramadan.

In some cases, potential test takers have gone to great lengths to apply for the test. In Pakistan, 98 percent of registered applicants took the test in December 2007, even though it was held the day Prime Minister Benazir Bhutto was assassinated. In Phnom Penh, Cambodia, about 30,000 people participated in an orientation session for the TOPIK in March of this year.

“I think the international status of Korean, which was selected as the ninth most influential language in the world by the World Intellectual Property Organization in 2007, has grown,” said Jeong Eun-hee, an official for the Human Resource Development Services of Korea.