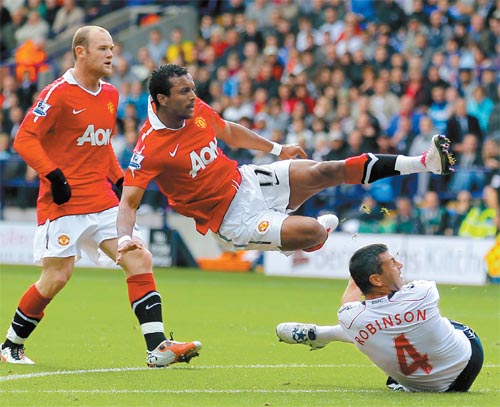 
LONDON - A sensational solo goal by Portuguese winger Nani and a Michael Owen header salvaged a 2-2 draw for Manchester United against the Bolton Wanderers in a lively Premier League match on Sunday.

Aston Villa moved into the fifth spot when Emile Heskey’s late header earned the club a 2-1 victory over the Wolverhampton Wanderers in Gerard Houllier’s first league match in charge of the midlands club, while Stoke City won 2-1 versus Newcastle United to move out of the bottom three after trailing at halftime.

Nani’s audacious dribble from the halfway line canceled out an early goal by defender Zat Knight. After Martin Petrov had restored Bolton’s lead, Owen came off the bench to rescue Alex Ferguson’s side with his 200th goal in English football. United’s third consecutive away draw of the season meant they missed the chance to take full advantage of Chelsea’s 1-0 defeat at Manchester City on Saturday and Arsenal’s surprising 3-2 home loss to West Bromwich Albion.

Champions Chelsea has 15 points from six games, while United has 12. Arsenal and City have 11 points and Villa have 10.

“Teams drop points when you don’t expect it,” he told United’s Web site (www.manutd.com). “That’s what the Premier League is like. Away from home we’ve scored seven goals and we’ve only taken three points. But we must take credit coming back again. Being behind twice away from home is not easy to come back from. It shows character.”

United has dominated Bolton in recent years, winning 10 of their last 11 meetings, but they were rocked after six minutes when Knight shot past Edwin van der Sar from close range.

The teams were tied after 23 minutes when Nani took possession near the halfway line and set off towards Bolton’s goal. After ghosting past three defenders, the Portuguese winger angled a shot past Jussi Jaaskelainen.

Wayne Rooney, playing his first away game since revelations about his private life were plastered across the tabloids, endured another quiet match and was substituted after the break by Federico Macheda, suffering a slight ankle knock. The England striker has managed just one goal for United since March and that came from the penalty spot against West Ham United this month.

Bolton regained the lead in the 67th minute with a sweeping move that ended with Johan Elmander feeding former Manchester City player Petrov to fire in a shot that deflected off Darren Fletcher.

Elmander wasted a glorious chance to make it 3-1 and Bolton paid the price when Nani’s teasing free kick was glanced in by Owen for his first league goal of the season to reach a notable career landmark..

Houllier, who witnessed many of Owen’s goals while manager of Liverpool, was full of praise for the oft-maligned Heskey, another player who thrived under him at Anfield. Heskey’s thumping header from Ashley Young’s cross after 88 minutes gave Villa the points. That came after Villa saw an early lead given to them by Stewart Downing cancelled out by Matt Jarvis.

“Everybody loves Emile at the club,” Houllier told Villa’s Web site. “He is a good teammate and what he needs is to keep believing in himself.”