Football may be in our girls’ DNA too

Football may be in our girls’ DNA too 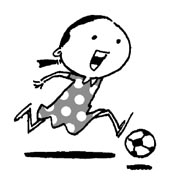 When my generation was young, gender differences were expressed through the games we played - football for the boys and gomujullori, a game for girls played with elastic bands.

The boys would spend whole days playing football on school playgrounds or in alleys. They used school bags or bricks as goal posts and kicked a rubber ball. And the play didn’t stop during school hours. It continued between classes in school corridors, where boys would practice their dribbling techniques with a bundle of used towels or bunched up clothes.

But football was off limits to girls. It wasn’t considered proper for girls to run around sweating and getting all covered in dust. Instead, girls had to resign themselves to gomujullori. Football was the exclusive property of boys.

The sport was introduced to Korea by the crew of the British Royal Navy ship Flying Horse, which landed at Incheon port in 1882, during the 19th year of King Gojong’s reign. Sixty-seven years later, in 1949, the first women’s football match was held in Seoul with the participation of three middle school girls’ teams - Muhak, Jungang and Myeongseong.

Although there weren’t many complaints about women playing either volleyball or basketball, there was such a strong reaction to girls playing football that the match was only played after much delay. Perhaps it was for that reason that women’s football disappeared again until after the Korean War.

In 2002, the Korea-Japan World Cup and “Bend It Like Beckham,” a film about a young woman whose dream is to play football, were great catalysts that showed once and for all that football was not the exclusive property of men.

It’s been said that Koreans have football in their DNA. During the Silla Dynasty, Koreans played chukguk, a game similar to football. Gomujullori also requires delicate footwork.

Recently, the Korean women’s football team won the U-17 World Cup title. It makes me wonder whether this momentous occasion signals a revival of our football DNA. If things keep going this way, it will only be a matter of time until we have a female Park Ji-sung who takes the lead in the FA Women’s Premier League or a female Cha Bum in the Women’s Budesliga.

*Ko Dae-hoon is an editorial writer of the JoongAng Ilbo.