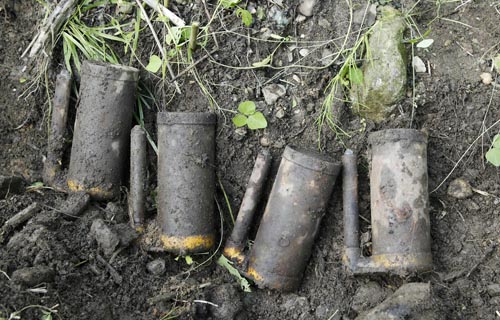 The M2A4 mines that the special report team discovered in Yeoncheon County, Gyeonggi. By Shin Seung-cheol


A recent analysis conducted on land thought to have been cleared of mines has turned up evidence suggesting the South Korean government did not do as thorough a job as had been advertised.

Despite nationwide mine clearing projects from 1998 to 2006 in almost all minefields south of the Demilitarized Zone, a JoongAng Ilbo investigative team discovered five mines in Gyeonggi and Gangwon just in the past two months, all of which were found in civilian areas.

Analysts say the dangers posed by land mines have increased this year because of heavy summer rains and landslides that could wash them from their original resting places.

The discovery of the five mines reminded - and even surprised - a population increasingly distant from the Korean War and its legacies.

The Korea Campaign to Ban Land Mines estimates that there are more than 3,900 unaccounted mines in civilian areas across the country, though the Ministry of National Defense said it is unable to put an exact figure on the number.

In Gyeonggi, one land mine was found on a low hill next to a farm. The hill was near the reconstruction site of the Gyeongwon Line railway. In Gangwon, another mine was found in front of vacation homes and restaurants, unbeknownst to patrons who have frequented the area for years.

The four land mines the JoongAng Ilbo investigation team found in Gyeonggi were M2A4s, which are antipersonnel mines.

Land mines laid since 1953 have taken the lives of well over 100 South Koreans. “Land mine accidents have occurred not only in combatant areas adjacent to the Demilitarized Zone, but in noncombatant areas as well, including beaches and on roads,” said Kim Ki-ho, head of the Korea Mine Clearance Research Institute, who accompanied the JoongAng Ilbo investigative team.

Since 1953, Gangwon has had the highest number of casualties from land mines, at 123 incidents, 55 of which resulted in death. Gyeonggi has suffered 101 casualties, including 19 deaths, followed by Incheon with 11, including four deaths, according to the JoongAng Ilbo investigation.

During the Cold War era, a massive amount of land mines were laid around military facilities such as bases, anti-aircraft guns and missile and radar stations. This is on top of the one-million-plus mines still in the DMZ. More mines were laid during the Cuban Missile Crisis and ahead of the 1986 Asian Games and 1988 Seoul Olympics. 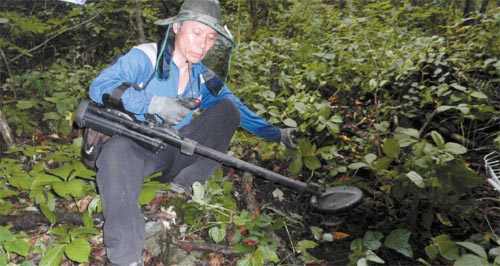 There are 36 areas throughout the country - besides the DMZ and areas of Gangwon and Gyeonggi - where land mines were once laid. They include areas in and around Seoul, Busan and South Gyeongsang. Approximately 75,000 land mines were put down by the U.S. and South Korean militaries.

Experts refer to the locations as so-called “land mine zones.”

“The zones [can be] located around hiking trails or mineral springs,” said Cho Jai-kook, professor at Yonsei University’s United Graduate School of Theology and head of Korea Campaign to Ban Land Mines. “When heavy rainfall or landslides occur, as happened this year, land mines washed down from their resting spots pose a greater threat to civilian security.”

The last land mine incident in Seoul occurred on May 7, 1991, when a person crossed military wire-netting on Mount Umyeon to collect herbs. He lost his right foot.

Mount Umyeon was supposedly cleared of mines as part of the nationwide mine clearance project, but Cho said an anonymous military official informed him that eight are unaccounted for.

The unaccounted land mines are believed to be littered behind warning signs that surround a military base on Mount Umyeon, behind the Seoul Arts Center in Seocho District.

Another area of particular concern, according to the JoongAng Ilbo investigation, is Yeoncheon County, Gyeonggi, where land mines were laid by the South Korean and U.S. militaries after the armistice treaty was signed in 1953 for security purposes. 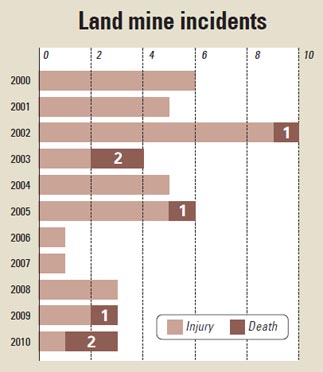 Korea had vowed to clear almost all mines south of the DMZ by 2006. Although largely successful, evidence suggests that not all mines have been found.

More than 60,000 were removed between 1998 and 2009, according to the Defense Ministry. And land-mine clearance has been ongoing in eight locations this year in Gangwon and other provinces, and 213 mines had been removed so far as of Sept. 9.

With almost 4,000 unaccounted for mines in the country, according to Korea Campaign to Ban Land Mines using Defense Ministry data, critics say that more needs to be done to protect the public.

“Despite the mine clearance activities, more than 3,900 land mines have not been discovered. The military has even admitted it,” said Kim Ki-ho of the Korea Mine Clearance Research Institute.

Despite warning signs placed around land cleared of mines, skeptics say the signs do not go far enough.

“The signs read ‘land mine danger zone in the past,’ but if a single land mine still remains in the area, the phrase ‘in the past’ should be changed to ‘now,’” said Kim.

Efforts to remove land mines will continue, according to the government.

“Land mine zones that do not affect military strategy will be gradually cleared,” said a military official. 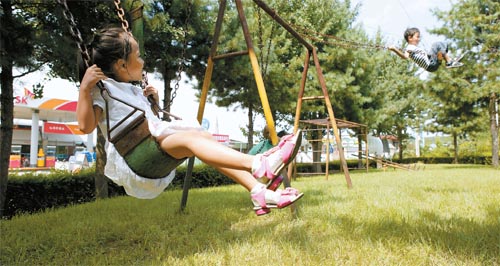 Local residents fear that land mines buried after the Korean War remain under the grass of this playground in Yeoncheon County, Gyeonggi. By Shin Seung-cheol

Old minefields have been particularly dangerous for farmers near the DMZ. In the past, farmers in Yeoncheon County were afraid to report discovered mines, worrying that the military could repossess their land. They ultimately feared a ban on farming, destroying their livelihoods.

As a result, so-called “land mine tombs” were created, where dozens of mines were buried by farmers.

“During the process of reclamation, people secretly excavated land mines and buried them in a pit,” said Lee Seong-gyu, 72, who lives in Baekhak Township in Yeoncheon. “Only a few old men over the age of 70 are aware of those land mine tombs,” according to the report.

To address the problem of remaining land mines, the Defense Ministry submitted a bill to the National Assembly on Tuesday, requesting to grant private companies permission to detect and remove land mines.

If passed, the bill would allow private entities to participate in mine sweeping and mine clearance activities, which have been done by government-certified experts.

Experts warn to not touch land mines if discovered. They also urge people to respect warning signs near military sites.

“When you discover a land mine, never touch it and report it to the police immediately,” said an expert from an explosives disposal unit in Gangwon. “Civilians sometimes bring the land mine by themselves to the police, but that is extremely dangerous.”