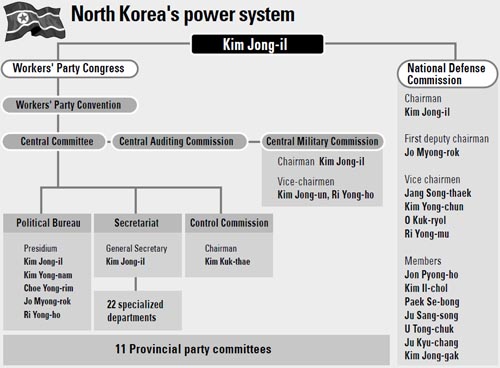 In a massive reshuffle of the Workers’ Party leadership, North Korea carried out yesterday a generational change of its power elite, presumably to back the dynastic power succession from Kim Jong-il to his youngest son, Jong-un.

But while Pyongyang removed veterans from founder Kim Il Sung’s generation and replaced them with officials from Kim Jong-il’s generation, the leadership is still old and aging - and far older than supposed successor Kim Jong-un, who is in his late 20s.

The North’s media released the names and profiles of 30 of the 32, excluding Kim Jong-il and his sister Kyong-hui. The average age of the entire group is 74. Of the 30 officials, 12 are in their 80s, while the youngest member is 53 years old.

Kim Kyong-hui, the younger sister of the North Korean leader, was named a Politburo member, further backing speculation that she will serve as patron of her nephew Jong-un. Her husband Jang Song-thaek, who was recently promoted to vice chairman of the National Defense Commission, was only named an alternate Politburo member, though his close political comrades were named to key posts in the party.

Choe Ryong-hae, a former provincial party secretary from North Hwanghae Province, rose quickly to join the North’s inner circle this week. Choe was given a four-star general ranking on Monday and named a secretary in the Workers’ Party Secretariat. He was also named an alternate Politburo member and a member of the party’s Central Military Commission.

Choe’s family ties to the Kims explain his political rise. He is the second son of Choe Hyon, one of Kim Il Sung’s closest comrades. He is also known to have maintained a close friendship with Kim Jong-il since childhood and to have a good relationship with Jang.

Benefiting from his father’s political halo, Choe has served key posts in the North. In 1996, he was named the first secretary for the Kim Il Sung Socialist Youth League, the second largest organization in the North after the Workers’ Party. He was demoted in 1998 for involvement in a corruption scandal. In 2003, Choe made a political comeback as a general affairs vice director of the Workers’ Party.

In 2007, he was named secretary in charge of North Hwanghae Province. His political strength was reflected when he came to the inter-Korean border to greet then-South Korean President Roh Moo-hyun for the 2007 summit. He has also accompanied Kim Jong-il on trips to China and other public activities.

Another notable rise to the inner circle was that of Ri Yong-ho, chief of the general staff of the North’s Korean People’s Army. Ri was named one of the five presidium members yesterday, following his promotion from general to vice marshal in the military.

Ri served as commander of the Pyongyang Defense Command and was promoted to chief of the general staff of the Korean People’s Army last year. He is also known as the best artillery expert in the North.

Aged politicians were removed from key posts. Kim Yong-nam, head of the North’s Presidium of the Supreme People’s Assembly and nominal head of state, and Choe Yong-rim, cabinet premier, were made presidium members in the Politburo, while Kim Yong-ju, Kim Jong-il’s uncle, stepped down from the presidium.

Ri Ul-sol, the 89-year-old marshal of the Korean People’s Army, and vice marshals Ri Ha-il and Jo Myong-rok - who are in their 70s and 80s - were removed from the Workers’ Party’s Central Military Commission.

O Kuk-ryol, vice chairman of the National Defense Commission, is now a member of the 124-member Workers’ Party Central Committee, failing to secure any key posts.