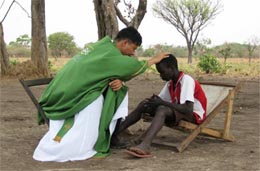 This documentary follows the life of the late Father Lee Tae-suk (1962-2001) from the moment he was diagnosed with colorectal cancer to the last moments of his life last January. It is a moving story of perseverance in the face of adversity and the power of community.

The film begins in February as the Tonj brass band marches into town, carrying pictures of the late Father Lee in a mournful funeral procession. The plot then moves backward, tracing the trajectory of Lee’s life.

Before he arrived in Tonj, Lee was a med school dropout in Korea who gave up his chance at becoming a successful doctor to live in a faraway land. Eventually, he became the town’s priest, its doctor and teacher.

He chose Tonj and put all of his effort into building up the community.

For many years, Lee was the only person in the area with any medical knowledge. More than 300 patients visited him each day and some even visited him at home in the middle of the night.

Today, Father Lee is revered as the Korean Albert Schweitzer, the philosopher, humanitarian and physician who founded a hospital bearing his name in Lambarene, Gabon.

The film was directed by Gu Soo-hwan, who was a reporter for KBS for eight years beginning in 1986 before he assumed his current position as a producer. 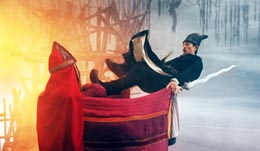 Another in a series of great Chinese action films from director Tsui Hark, “D-Project” takes a familiar spin on China’s usual mystery genre and turns it into an action-packed affair.

The emperor’s widow, played by Carina Lau, is about to become the ruler of China in the year 687, but some of her court officials literally start bursting into flame.

The incidents have caused the emperor’s inauguration to be delayed and why her officials seem to be dying left and right is unknown.

That’s when the exiled Detective Dee (Andy Lau) gets called in.

The detective has to figure out the mystery, all while battling hordes of enemies - real and mythical - in traditional kung fu fighting action scenes.

D-Project was shown at the Toronto International Film Festival and received a positive reception.

Aside from it’s egregiously long title, D-Project, by all accounts, is a fast action flick that just about everyone can enjoy.

The Corleone family is back in the re-release of the 1974 cinematic triumph.

Directed by Francis Ford Coppola, the second installment to “The Godfather” is filled with a bevy of some of Hollywood’s biggest actors today: Al Pacino, Robert Duvall, Robert De Niro and Diane Keaton.

Part II is at once both a sequel and a prequel with two parallel story lines.

The first is a flashback look at the rise of De Niro’s Don Vito Corleone (who was played by Marlon Brando in the original) from the scrappy streets of Sicily to the creation of his crime family in New York in the 1910s.

The other narrative follows Vito’s son, Michael (who is played by Al Pacino), four decades later in the 1950s as the young don looks to expand the Corleone crime empire to Las Vegas (casinos become the Corleone’s biggest income source), Hollywood and Cuba.

Oft regarded as one the best films ever made, The Godfather: Part II’s re-release will allow a new generation of viewers to see for themselves the movie that garnered six Academy Awards when it was first released.

If you’re a middle-aged woman looking for something to make you happy, then “Eat Pray Love” is probably a film you want to watch.

If you’re anybody else, probably not.

Eat Pray Love stars Julia Roberts as a newly-divorced professional named Liz Gilbert - the author of the book of the same name.

Gilbert is not satisfied with her life and it’s this discontent, the result of some kind of midlife crisis, that prompts her to drop everything she is doing to go on an around-the-world journey to three countries - Italy to eat, India to pray and Indonesia’s Bali to find love - to get in touch with her true self.

Along the way she meets interesting people - including a language instructor in Italy (played by Luca Argentero), a pilgrim in India (played by Richard Jenkins) and a creepy guy named Felipe played by “No Country For Old Men” star Javier Bardem, who acts as Gilbert’s love interest in Bali.

These often weird, but seemingly fascinating people guide her along her journey.

Director Ryan Murphy knows his audience well enough that this could be appealing to some people - the aforementioned middle-aged woman crowd.