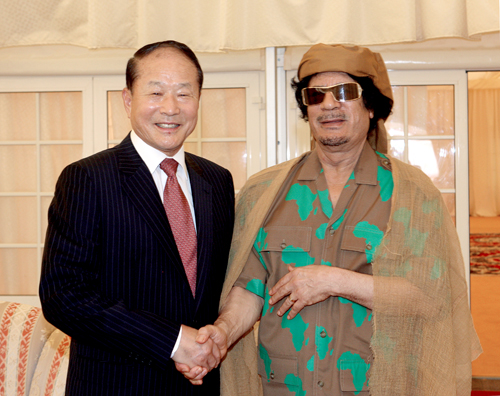 Libya released two Korean nationals after months of detention over suspected missionary activities, according to the Ministry of Foreign Affairs and Trade yesterday, a move Seoul hopes puts a cap on a diplomatic row that could cost its lucrative economic partnership with the African country.

The South Korean government stressed that the release came with no strings attached, but some observers speculated about a behind-the-scenes deal in which Seoul promised benefits in return.

The ministry said the two men were handed over to their families on Saturday evening Libyan time, as South Korean Embassy officials in Tripoli watched.

The release followed a fourth visit to Libya by Representative Lee Sang-deuk, Seoul’s special envoy, and his first meeting with Libyan leader Muammar al-Qaddafi. Lee, the elder brother of President Lee Myung-bak, met al-Qaddafi on Thursday in Sirte, the administrative capital of Libya.

“Thanks to Representative Lee Sang-deuk’s visits, along with efforts through diplomatic and intelligence channels, we are putting a virtual end to the case,” said Foreign Ministry spokesman Kim Young-sun to reporters. “Using this as a lesson, we hope to strengthen economic and personnel exchanges with Libya, which we celebrate 30-years of diplomatic ties with this year.”

The ministry said Libya is allowing the two to stay in Libya if they want. Observers say that is considered a favor compared with similar missionary cases in which Libya deported suspects. Whether the two will stay remains uncertain, the ministry said.

A protestant missionary identified by his surname Gu was arrested in mid-June for violating the Muslim country’s religious law. A South Korean farm owner, Jeon, was arrested the next month on charges of helping Gu. The case might have been resolved through existing diplomatic channels; a religious law violation overseas is not rare for South Korea, which sends the world’s second largest number of Christian missionaries after the U.S.

But things became complicated because Libya was enraged by alleged espionage activity by a South Korean Embassy intelligence official at about the same time and it suspected the two were involved. The embassy official, who Libya suspected gathered information on the Libyan leader and the country’s weapons systems, was deported in June, followed by Libya’s relocation of its diplomatic mission in Seoul to China. Seoul claimed it was just part of its intelligence gathering on North Korea.

Upon his arrival in Seoul on Saturday, Lee Sang-deuk said he admitted Seoul’s responsibility for the incident during his meeting with al-Qaddafi, without elaborating. He also said the government will take relevant steps to possibly make an apology and to prevent an incident like this from occurring in the future.