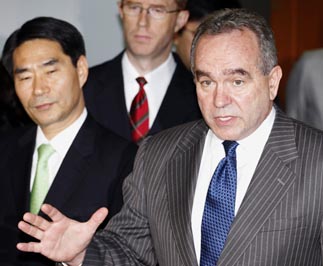 Wrapping up another visit to South Korea in four months, Kurt Campbell, Assistant Secretary of State for East Asian and Pacific Affairs said yesterday that the United States is intent on watching the two Koreas “reengage.”

“The critical component in terms of developments on the Korean peninsula in the current environment is to see a reengagement between North and South Korea,” Campbell told reporters yesterday to a question on the likelihood of summit talks between the two Koreas.

The envoy also added that the United States “believes there are some signs of dialogue and engagement between the North and South and we encourage that process to continue.”

His meeting with the South Korean officials “provided the opportunity for discussions about developments last week in terms of party congress and other things that we’re seeing in North Korea,” according to Campbell.

North Korea’s leader’s son, Kim Jong-un, made his official debut last week during a rare Workers’ Party convention where he was given high ranks within the party after being made a four-star general ahead of the meeting.

When asked if an apology was needed for the sinking of the South Korean warship Cheonan, Campbell repeated the need for reengagement between the two Koreas but said Seoul has managed the “very challenging relationship with North Korea with statesmanship” and that the U.S. feels “comfortable with South Korea in the lead.”

As for the reengagement he underscored, Campbell said “the fundamentals of that really are for South Koreans to decide.”