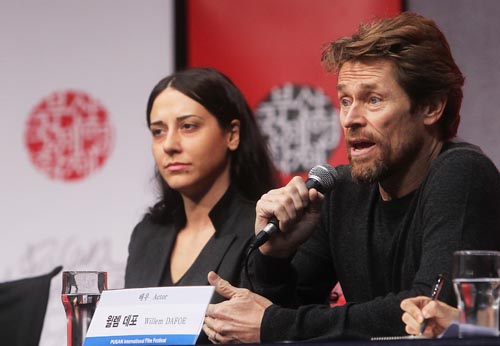 
Hollywood star Willem Dafoe has built a career by playing edgy characters dwelling on the fringes of society and he is getting more “reckless” with age, he told journalists at Asia’s most prestigious film festival.

Dafoe is in Busan for the 15th Pusan International Film Festival as he promotes his latest production “A Woman.” The gripping thriller was directed by his Italian wife Giada Colagrande.

The 55-year-old said experience and success had allowed him more freedom in choosing what parts he now plays.

“Each time I approach a film it is like the first time,” said the star of such international hits as “Platoon,” “The English Patient” and “Mississippi Burning”.

“As I get older I feel like I can be a little more reckless because when I was younger, I felt if I made bad choices it could kill my opportunities in the future.

“I feel that less now so I am always seeking situations when it feels like the first time.”

“A Woman” harks back to the American film noir movement of the 1950s and it presents Dafoe as a writer struggling with a new relationship because he is haunted by the death of his wife.

Dafoe explained that the film, directed by his wife, presented a unique opportunity, not only because they shared “trust, complicity and short-hand” on and off screen but because Colagrande’s style of directing intrigued him.

“Nobody is quite working the way she is. I think she has a really unique vision,” said Dafoe. “It’s quite rigorous, it’s quite classical and it’s quite personal.

“I am very much attracted to strong directors, passionate directors, people who are on fire when it comes to their cinema. I am less attracted to exercises in style. I require more adventure.”

“A Woman” is the third film for Colagrande, after 2002’s “Open My Heart,” which screened at the Venice Film Festival that year, and 2005’s “Before It Had A Name,” which also starred Dafoe.

She said the working relationship between the couple - who married in 2005 - was fine.

“I like to work with things that are intimate, personal,” she said. “And Willem is certainly part of the material that I know very well, that belongs to me.”

While Dafoe is known as an actor who is very serious about his craft, the American revealed a lighter side, too, when one reporter mentioned his role as the Green Goblin in the “Spider-Man” franchise, before apologizing for bringing the subject up.

“That’s part of my story, so don’t be sorry,” Dafoe laughed. “I’m very proud of that movie.”

The Busan event continues until Friday and is screening 308 films, 103 of which are world premieres.

About 150,000 people are expected to attend the festival. It has also attracted Oscar-winning director Oliver Stone, Bollywood star Aishwarya Rai and her husband Abhishek Bachchan and French actress Juliette Binoche.

The festival’s main award - New Currents - offers two first prizes of $30,000 for first- or second-time Asian directors and this year it will be decided from a field of 13 films from across the region.

The winners will be announced on Friday.

The other PIFF competition section, Flash Forward, is dedicated to discovering new talents from non-Asian countries. Eleven films from Europe and Australia are vying for the $20,000 Flash Forward award.