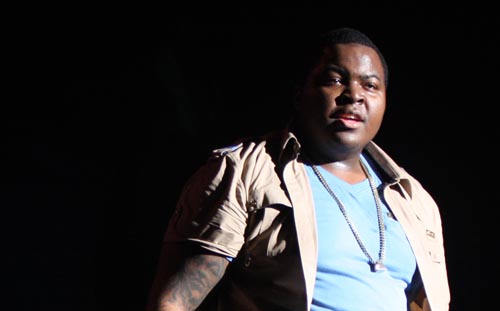 Sean Kingston was the opening act on the last day of the Seoul Soul Festival on Sunday. Provided by Southern Star Entertainment


Jamaican-American singer Sean Kingston says he is in Korea to show his Korean fans a good time. With his definition of fun, that could mean a ruckus on the dance floor.

“My definition of fun is just having a great time and forgetting about your life problems,” he said on Sunday before opening the show on the last day of the two-day Seoul Soul Festival. “Just playing sports and simply enjoying life. That’s the type of music I want to make.”

The festival is a two-day event dedicated to soul and R&B music.

This is Kingston’s second visit to Korea following his appearance with R&B artist Ne-Yo in 2008, and he said he is glad to be back.

“I was really rushed the first time I was here so I didn’t really get to see anything. It’s pretty much the same case this time,” Kingston said. “But I do remember my first performance. I had a great show and I’m glad to come back out here again.”

His performance at this year’s festival wraps up a month-long Asian tour, which came on the heels of a North American tour with teen superstar Justin Bieber that started in June.

The two singers collaborated on the hit single “Eenie Meenie,” but they were close friends even before that.

“I met Justin a year and a half ago in Los Angeles before the collaboration. He told me he was discovered on YouTube and I thought it was pretty cool because I was discovered on MySpace,” Kingston said. “We just started texting each other and he came to my house in Miami and we recorded ‘Eenie Meenie.’ From there we started to hang out so much that they just decided to put us on tour together.”

Although their fan bases seem very different, Kingston said their fans seemed to enjoy the chance to experience new sounds.

“He has a lot of young girls as his fans and they’re really energetic and like to have fun,” Kingston said. “It was also a good opportunity to introduce my fan base, who are mostly in their late teens or early 20s, to his. It was good to mesh them together and show them various styles of music.”

Kingston said the tour gave him an opportunity to get to know his fans.

“I just wanted to know more about my fans from all over the world,” the singer said. “A lot of people that didn’t know Sean Kingston or weren’t familiar with his music came to the shows and enjoyed themselves. I think the tour was about gathering fans in these countries and gaining recognition.”

Still, he said that the most difficult thing about touring is being away from his family, but he said he did enjoy meeting his fans.

“It’s about just communicating with them and being in touch with them,” he said. “They’ve definitely become an inspiration for my work. They motivate me to give them better music and keep living up to my full potential.”