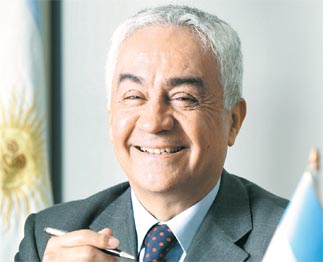 “Korea’s hosting of the upcoming G-20 Summit is an example of its successful economic and social policy with the goal of creating a fair society,” said Carlos Alberto Arganaraz, Argentinian ambassador to Korea. “We are sure that the G-20 meeting organized by Korea will be a great success since Koreans have great experience in organizing summits and major international events such as the World Cup games, the Olympic Games and the upcoming F1 race.”

In his e-mail interview with the JoongAng Daily, Arganaraz, Argentina’s chief envoy, highly praised the fast-growing bilateral relations between Korea and his home country.

The two nations tied a diplomatic knot in 1962, but the ties have deepened in recent years. According to Korea’s Ministry of Foreign Affairs and Trade, Korean-Latin American cooperation on economic and trade issues has steadily increased since the 2000s.

In 2004, then-President Roh Moo-hyun’s visit to Brazil, Argentina and Chile provided an opportunity for further development of comprehensive cooperation between Korea and Latin America, strengthening and broadening the scope of the friendship.

Arganaraz, who arrived in Seoul on Sept. 15 for his new mission, said bilateral relations are growing faster not only through government actions but also thanks to the business community, academia, cultural institutions and tourists.

The ambassador also spoke positively about Korea’s wish to participate in his country’s nuclear power-plant project.

“Korea’s energy policy based on nuclear technology is an excellent example of knowledge building that will work toward the transfer of technology to Argentina in this field,” he said. “Recently, during the visit of the Argentine minister of federal planning, public investment and service, an important [memorandum of understanding was] signed with Korea’s minister of knowledge economy,” Arganaraz said. “The deal constitutes an important framework of the development of bilateral cooperation with the possibility of the participation of Korean enterprises in the construction and revamping of nuclear-power energy plants in Argentina.”

Argentina has two nuclear power plants in operation and another one is expected to be completed next year after its construction was suspended because of financial problems. A new project to build light-water reactors is set to be launched next year.

During Argentina’s Minister of Planning and Public Works Julio de Vido’s visit to Seoul last month, the two countries signed a deal that will allow Korea to support Argentina’s plan to build a new nuclear plant and extend the life of its existing ones.

The MOU was considered a move that could lead to Korea’s nuclear industry establishing its first foothold in Latin America.

In addition to the developing cooperation between the two countries, Argentina has also been a strong supporter of the G-20 and Korea’s role in it.

“The G-20 has the historical role of being a forum to discuss the most important issues concerning the global economy and to provide the political framework in order to create a global consensus among member and nonmember countries toward sustainable social and economic development,” Arganaraz said. “The previous issues of this most important gathering of heads of states and governments have demonstrated to the world consensus and political will to resolve the financial crisis and its consequences. The G-20 should analyze the role of multilateral credit organizations and guide their reforms within the scope of creating economic and employment stabilities as well as monetary stability.”

He said Argentina has coped well with the 2008 financial crisis because of its fair economic policy that sustained consumption and savings. Small- and medium-sized enterprises played a significant role in providing jobs and the country’s monetary stability has allowed exporters go on producing goods and services for foreign markets, he said.

“We were able to see a 9-percent increase in GDP in the last 12 months,” Arganaraz said.

The Argentine envoy said he wished to see further development in the two countries’ bilateral ties and extended cooperation within the G-20 forum.

“We appreciate President Lee Myung-bak for his welcoming initiative to broaden and strengthen the relationship with Latin America and Caribbean countries, since Korea is an important partner in economic and commercial cooperation with Southeast America,” Arganaraz said. “Argentina has a lot to offer concerning agriculture and agro-industrial cooperation due to the experience accumulated in this field [over many years] by the Argentine Institute for Agricultural Research.

“Korean technicians may profit from the experience gained in Argentina on many aspects concerning seeds, new methods of growing vegetables and so on.”