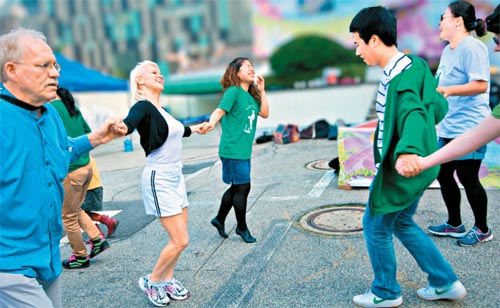 Participants enjoy the movement of the ceili dance at the Seoul Irish Ceili Dance and Music Festival in Daesung Plaza in Insa-dong, on Sunday. Provided by Tom Coyner


Green balloons, the sound of dance steps and the scent of Irish coffee filled Daesung Plaza in Insa-dong Sunday afternoon.

The neighborhood in central Seoul known more for its Korean antiques and crafts played host to the Seoul Irish Ceili Dance and Music Festival. The event was organized by the Irish Association of Korea and sponsored by Daesung Corporation and the Seoul Global Center. It was the first time the event had been held since 2005.

“Ceili” means “gathering” in Irish, according to Bernard Hughes, a member of IAK who works as a theater producer. Specifically, a Ceili is a traditional Irish social dance event involving a number of set dances for between two to 16 dancers.

The mixed crowd of locals and expats, young and old, grooved to the sounds of popular songs such as “The Walls of Limerick,” “The Siege of Ennis” and “The Haymaker’s Jig.”

“Irish dance is a good way to stay healthy, to socialize and to maintain our own culture,” Emma Kinsella, who is from Ireland, said after she performed a traditional Irish dance.

Irish dancing cannot be described without consideration for Irish music. The festival provided a rare chance to listen to the sounds of the bodhran, a round Irish drum.

There were also two music performances. One was by a Korean group called Bard, the other was an impromptu group of musicians who had gathered to play for the event. John Lee, one of the members of the group, talked about his love for Irish music and how the group came together.

“I don’t want to sound arrogant, but Ireland has the best folk music in Europe,” Lee said. “It’s so old, and there are more than a thousand tunes. Once we know the tunes, we can play with anyone, even if we don’t know them personally. It brings people together.”

“Irish music is beautiful, and the sound [is] haunting,” she said.

Even after the festival was over, the beat of the bodhran continued to resonate.

“Judging by the success of this event, we hope that we will be able to host more in the future,” said Conor O’Reilly, an IAK committee member.