Your coffee, now with a side of art

Your coffee, now with a side of art

Manoffin G-cafe in Banpo-dong is just one of a new crop of cafes that have forged partnerships with art galleries. Provided by Gana Art


Cafes have long been organizing art exhibits as a way to make their spaces unique while also supporting young local artists. Some cafes have as much artwork as a small gallery because the owners are art collectors or artists themselves. But a new crop of cafes is crossing even further into the art world by way of partnerships with art galleries. Although this kind of business is not yet common in Korea, the number is on the rise.

One such enterprise is Manoffin, a coffee- and muffin-house chain operated by Mr. Pizza, a local pizza chain. This year Manoffin opened three gallery cafes named Manoffin G-cafe in cooperation with Gana Art, one of the biggest private galleries in the nation.

The establishments sell paintings and photos of young artists introduced by Gana Art.

In addition, Manoffin said in a statement last week it will provide financial support to five selected artists aged 20 to 35.

Artists will be chosen through a portfolio contest and the first round of screening will take place later this month.

The 10 selected artists’ works will be exhibited at the Banpo-dong Manoffin G-cafe in southern Seoul throughout November. The five artists who make the final cut on Nov. 26 will be awarded prizes of between 3 million won ($2,660) and 10 million won each. 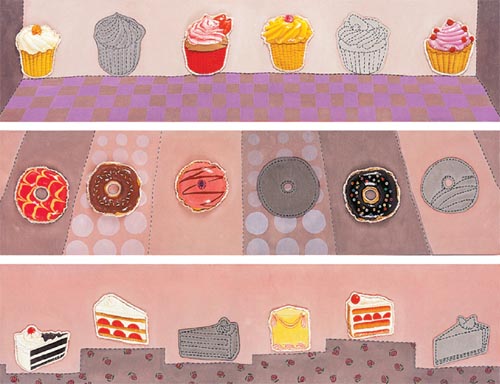 “I Take This” by Hong Myung-hwa. Hong is among the five artists-in-residence supported by Mr. Pizza in cooperation with Gana Art. Provided by Gana Art

Manoffin is already supporting residencies for five other artists at Jangheung Atelier. One of these is Hong Myung-hwa, who makes fabric collages that certainly go well with her patrons’ identity.

Her work depict cakes, donuts, muffins and coffee in bright warm colors, which might remind some of American pop artist Wayne Thiebaud’s work.

Another of the artists in residence is Kang Young-mean, a pop artist known for cartoonish heart-faced figures painted in soft cheerful colors. These works also complement the coffee-and-muffin house’s atmosphere.

Manoffin is not the only cafe that exhibits and sells art.

Cafe Nescafe, operated by the Swiss-based food company Nestle, has, since early this year, held shows by young emerging artists, and is selling their artwork in four branches located in cultural hot spots such as Samcheong-dong in central Seoul and Cheongdam-dong in the southern part of the city. 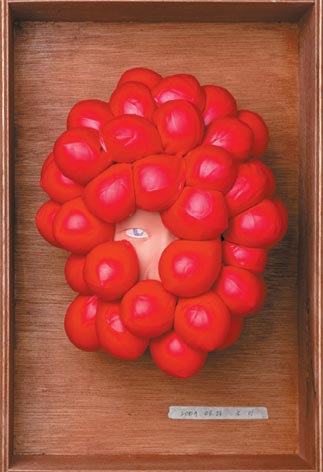 The works of young artists, including Lee Jin-suk’s above, will be exhibited in 16 cafes and restaurants along Garosu-gil, Sinsa-dong, this weekend as part of Art Carnival with Cafes, organized by Urban Art. Provided by the gallery

The exhibits are organized by Zibook, an art consulting group managed by artists working in various fields.

“Cafes are feeling the need to differentiate themselves from their competitors and the gallery cafe is one way to do it,” said Kim Gunny, a marketing official at Cafe Nescafe, adding that the chain is considering expanding the number of gallery-cafe branches in the city.

This weekend, visitors to cafes and restaurants on Garosu-gil, a two-lane street in Sinsa-dong, southern Seoul, another hot spot for art lovers and fashionable shoppers in southern Seoul, will have a chance to see and buy work by young artists while enjoying their cup of tea or coffee at an event called Art Carnival with Cafes.

The event, which runs from Friday to Sunday, was organized by Urban Art, a gallery in the neighborhood.

The event features 31 artists ages 20 to 35 and the work will be displayed at 16 well-known cafes and restaurants on the street, including Elbon and Cafe Papergarden.

“All of the revenue from the sale of the artwork will be delivered to the artists, with the cafes and restaurants not taking commissions,” Urban Art said in a statement. “The event is intended to help young artists and to upgrade the culture of the region.”