Captain-less, Korea comes out in a draw

Captain-less, Korea comes out in a draw 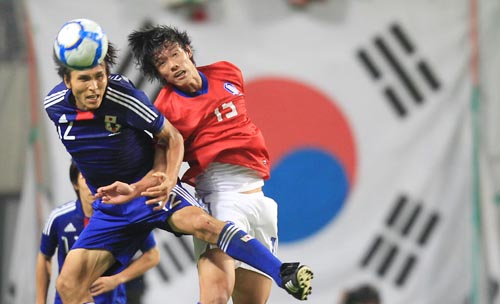 Hong Jeong-ho, right, and Ryoichi Maeda battle for the ball in midair during a friendly match between Korea and Japan at Seoul World Cup Stadium on Tuesday night. [YONHAP]


With the final friendly game of the year in the books, national-team manager Cho Kwang-rae and his men have many areas to improve on before the 2011 Qatar Asian Cup in January.

Without its captain Park Ji-sung in the lineup, Korea played Japan to a scoreless draw on Tuesday night. With the draw, Cho improved his record as national-team manager to one win, one draw and one loss. Cho has been using recent friendly matches to evaluate and build the team in preparation for the Asian Cup.

“I want to thank the players for playing hard in what was a very tough match,” Cho said. “But the results of the game fell far short of my expectations. To be honest, I have yet to fully evaluate all the players. Our goal at this point is to be ready for the Asian Cup. We will have two weeks [in December] to prepare for the Asian Cup and with the players I have in mind, we can reach 80 to 90 percent of the goal I have in mind.”

Park Ji-sung was scratched from the game on Monday after feeling severe pain in his repaired right knee. Yoon Bitgaram and Shin Hyung-min started at center midfield in place of the expected starters Park Ji-sung and Ki Sung-yueng. The midfield looked sluggish in comparison to its counterpart but Korea did manage to gain several chances on set-piece situations.

“Korea is strong in set-piece situations and we spent a lot of time preparing for that aspect of the game,” said Japanese manager Alberto Zaccheroni. “Korea dictated the tempo of the game early on using their superior physical conditioning but we stretched the field to penetrate Korea’s defense through the left wing to gain momentum in the game.”

Cho inserted Ki, Cha Du-ri and Yeom Ki-hun to start the second half and Korea’s offense seemed to pick up its pace. With the game deadlocked at a scoreless draw, Korea escaped a scary moment in the 76th minute when Keisuke Honda’s cross from the left side, deep in the Korean zone, hit defender Choi Hyo-jin’s arm. But the referee determined it was unintentional and did not award Japan with a penalty kick.

“The Japanese were very effective in the way they pressed the opposing team with their forwards and midfielders,” said Cho. “I had determined Park Ji-sung would play a pivotal role in the game and had planned on starting him at center midfield but things did not work out as planned. We will need to look for attack-minded midfielders in case Park is unavailable for the Asian Cup.”

On defense, Cho Young-hyung was to lead the defensive line and mark Honda but Cho looked lost at times. The versatile defender was given the role of switching from center defense to defensive midfield.

“I’m not satisfied with my play,” said Cho. “It was my first time taking on the role and it was confusing at times and it also physically demanding. I will have to study my new role further to produce better results in the future.”

Despite qualifying for seven consecutive World Cups, Korea has not fared well at the Asian Cup. Since winning back-to-back titles starting with the inaugural event in 1956, Korea has failed to win another title since 1960.

Cho Kwang-rae will likely review several more players before making slight changes to the midfield and forward positions. The preliminary 50-man roster for the Asian Cup is to be submitted on Dec. 7 with the deadline for the final 23-man roster Dec. 28. The national team will gather on Christmas Eve to prepare for the 2011 Asian Cup in Qatar.

The home-and-away series between Korea and Japan was last held in 1991.