When the pressure is on, men pop the question

When the pressure is on, men pop the question 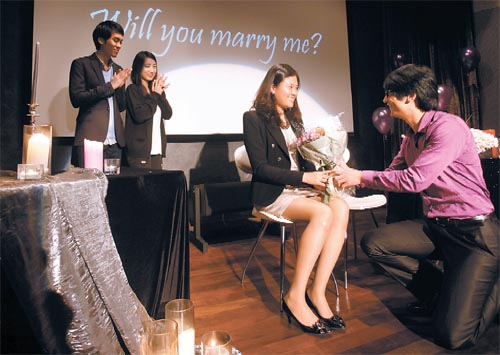 Kim Yong-wook, right, proposes to his girlfriend Kim Go-eun, at Ars Hall, located in Seokchon-dong, on Oct. 3. The couple will tie the knot this Saturday. As is the norm in Korea, Yong-wook did not propose to his girlfriend until after they arranged the wedding. Kim said he wanted to satisfy his girlfriend’s dream of getting a romantic proposal. By Oh Sang-min


The curtain is up and the spotlight is on. An actor and actress appear on a small stage - but there are only two people in the audience.

The play, a run-of-the-mill love story, is centered on a high school girl who has a crush on a boy who joins the same club.

The play is neither a masterpiece nor a tearjerker, but a woman is constantly drying tears from her eyes while watching the 15-minute play in a small hall in Seokchon-dong, eastern Seoul. The man next to her puts his arm around his lover to ease the sobbing.

As the play draws to a close, the man leaves his seat. Next, a series of romantic pictures and a long love letter are projected onto a huge screen.

The letter ends with “Will you marry me?” (written in English) and the man suddenly appears on stage holding a bouquet of roses in one hand and a microphone in the other.

With a shy smile and puffy eyes from crying, she says “yes.”

Ahn Byung-min, 33, who orchestrated the event, beams with satisfaction.

“It was a success,” said Ahn, wiping a bead of sweat from his forehead. 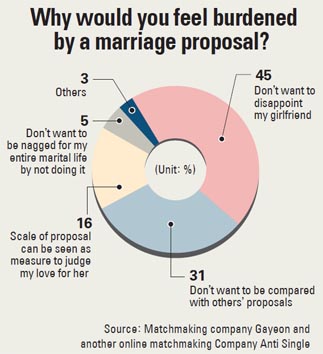 He’s been in the wedding proposal industry for over 10 years. This particular product, called “My Story,” is one of the best-selling services. In My Story, actors make a short play based on each couple’s own love story.

The only person in the dark was Kim Go-eun. “He’s far from a romantic. I never expected he would propose to me. Since we only have a couple of days before the big day, I almost gave up getting a proposal from him,” said the 26-year-old. They will marry this Saturday.

“She kept sending me signs that she wants to get a decent proposal by talking about some proposals her friends received,” the husband-to-be said.

In Korea, wedding proposals are not as common as in other countries. In fact, most men do not formally propose - and among those that do, it usually happens after the wedding is planned.

For Korean men, proposing in the traditional Western sense is simply not the cultural norm. Instead, Korean couples often agree to get married after the men ask indirectly. Only later does the man sometimes drop to his knees to placate his fiancee, who already knows she is engaged.

Of those who formally propose, “about 80 percent of them propose after everything is decided,” said Ahn. He currently runs the company Dugeun Dugeun Event, specializing in men who plan to - or forced to - propose to their loved ones. Dugeun means “pit-a-pat” in Korean.

“I even saw one man who proposed to his wife-to-be the day before their wedding. I guess they just don’t want to ... be bothered for the rest of their marital life just because they don’t do it,” said Ahn with a laugh.

Another industry insider agrees with Ahn.

Among formal proposals, “between 60 and 70 percent of them propose to their future wives a few weeks before their wedding days,” said Kim Hag-soo, manager at French restaurant Continental at the Shilla Hotel in Jangchung-dong. Kim has helped more than 400 couples get hitched over the past four years.

Shotgun proposals are nothing new for Korean women.

“I openly asked him when he would propose to me a couple of times before, because I [did not want to be like] many women I have seen nag their husbands when they watch movies where there are romantic proposal scenes,” said Lee Eun-jung, 31, who walked down the aisle in June.

“They end up fighting over [a lack of] a proposal. I didn’t want to be one of those women. My husband proposed to me a week before our wedding, but it was not that touching or romantic. Maybe because everything was already set; I kept sending him signs, and I knew I was going to get it one day before my wedding,” Lee added.

A romantic proposal can be very stressful for most Korean men. There is also a stark difference between men and women over the concept of a proposal.

A survey conducted in May by the match-making company Gayeon and another online match-making Web site, Anti Single, found that among the 568 respondents, 57 percent of men said that they do not see a proposal as something necessary. But 89 percent of women said a proposal is essential.

In addition, 73 percent of men who are seeing someone under the assumption that they will marry their girlfriends said they feel burdened when thinking of proposing to their significant other.

Five percent of respondents said they do not want to be nagged by their future wives for not having proposed.

There are deeper-rooted reasons for the lack of formal proposals.

Chief among them, experts say, is a Korean culture that sees marriage less as a union between a man and a woman, but more as a union of two families, led by parents.

“Men and women play leading roles in Western countries as they plan the entire process of the wedding. Their parents are invited. But it’s totally different in Korea,” said Cho Hye-joang, cultural anthropology professor at Yonsei University.

“There are few things you can choose because parents have the upper hand,” Cho added. “In addition, a proposal is not a part of our culture ... Most women dream of getting proposals, and it creates this distorted proposal culture,” she added.

In fact, many parents visit fortune tellers to pick the best day for their child’s wedding - called gilil in Korean. Many couples also choose traditional invitation cards based on their parents’ preferences. Because of this, almost all invitation card manufacturers offer free and mini-sized invitation cards for those who purchase a certain number of cards. These small and mini-sized cards are often handed out to friends of brides and bridegrooms.

Rando Kim, a professor of consumer sciences at Seoul National University, links the Korean way of marrying to family reputation. “In Korea, a wedding is not for the couple, but for parents. Parents want to save face. For this reason, even deciding a wedding venue is not something they cannot be involved in.”

But times are changing and more women are demanding proposals.

Thanks to this new proposal culture, many proposal event companies seek to lure male clients with cheesy, corny, elaborate or traditional proposal events that cost anywhere from a few hundred thousand won to millions of won.

Indeed, it is a budding market - one that many companies are rushing to fill; Hotels, restaurants, theaters, cafes and baseball stadiums have all jumped in.

“It is a recession-proof industry, and I believe it has high potential to become bigger than now. But there should be some strings attached,” said Ahn from Dugeun Dugeun Event.

“Women shouldn’t know about this business. Only men should know,” said Ahn with a big grin on his face.