“Skate or Die” is living proof that one-dimensional movies aren’t just made in America.

Two pot-smoking teenagers in France (played by Mickey Mahut and Idriss Diop) witness a murder and decide to film it in progress. But of course, they get caught and the rest of the movie involves these two inner-city kids getting chased by bad guys.

It’s a good thing the kids are pretty darn good skaters. They are so good in fact that it seems they can outskate cars, make jumping ramps appear out of nowhere and do tricks that only Tony Hawk would dare attempt.

So take “Pineapple Express” and add some high-speed chase sequences involving skateboards, and you’ve got Skate or Die.

It all seems like something you could easily enjoy just for the thrills; just don’t expect any real plot development out of this French film.

South Africa took the world’s attention when it became the first African country to host the World Cup last summer.

This documentary tells the lesser-known story of an elementary school that participates in a World Cup of its own - the International Youth Football Competition. It follows Lim Hong-sae, the film’s director, who went to South Africa in the beginning of 2006. Since then, Lim has taught more than 5,000 children how to play the game. The film shows how - in a nation beset with crime and AIDS, where people watch their loved ones die - people overcome hardship by working together. 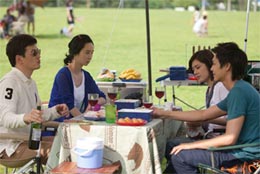 Known for creating some of the nation’s best chaotic love stories, including “Singles” (2003) and “Hellcats” (2008), director Kwon Chil-in is at it again.

This film starts when Ji-heun (Chu Ja-hyun) is fired from work for being the only single woman. She is then dumped by her boyfriend of seven years. With nowhere to go, she ends up staying at her married friend Kyung-rin’s (Han Soo-yun) house. But that’s not the end of the surprises. When she runs into Kyung-rin’s husband Myong-won (Jung Chan) at the batting cages, sparks fly between them.

Meanwhile, Kyung-rin finds herself drawn to her husband’s coworker Dong-ju (Kim Heung-soo). Bored with her routine life, Kyung-rin can’t help but be attracted to Dong-ju.

The secret love lives of these four characters is revealed and the crazy mix-up of relationships begins.

With all of the music and theatrics in this film, opera lovers will not be disappointed. However, “I, Don Giovanni” is not a simple restaging of the opera. Director Carlos Suara exposes the hidden drama and romance backstage, which is an opera in itself.

The film is based on the life of 18th century Italian lyricist Lorenzo da Ponte, who collaborated with Mozart on “Don Giovanni.”

Poet Lorenzo da Ponte (Lorenzo Balducci), originally a priest, is sent into exile in Vienna for his numerous affairs. His friend and mentor Giacomo Casanova (Tobias Morettie) introduces da Ponte to the king’s favorite composer, Salieri (Ennio Fantastichini). Out of jealousy for his competition, Salieri introduces da Ponte to sickly composer Wolfgang Amadeus Mozart (Lino Guanciale). Da Ponte ultimately becomes Mozart’s librettist on Don Giovanni, inspired by Casanova, and gets himself involved in a couple of romantic affairs, which, in the end, becomes the inspiration for the opera. 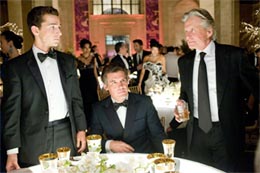 Gordon Gekko is back in “Wall Street: Money Never Sleeps,” the sequel to the 1987 cultural touchstone “Wall Street.” And so are the key players from the original film, which vilified and worshipped the fast-paced decadence of the 1980s. Oliver Stone is once again in the director’s chair, and Michael Douglas is Gekko, the legendary character who gave Douglas an Oscar for Best Actor two decades ago - an era Douglas perfectly encapsulated with Gekko’s “Greed is good” oration.

The latest reincarnation of Wall Street comes after Gekko’s eight-year prison sentence. The story centers on the 2008 global financial crisis, and presents a vivid, semiaccurate moral fable of sin, greed and felonious characters who bring the world economy to its knees. The young striver who was played by Charlie Sheen has been replaced by Shia LaBeouf, who is dating Gekko’s daughter, played by Carey Mulligan. The movie is ambitious in its scale and eye-catching in its storytelling. It’s not the classic Stone’s first installment came to be, but it is still arresting ? a tale through which to make sense of the cultural zeitgeist housed inside the gilded corner offices of Manhattan.