May he find his final resting place

May he find his final resting place 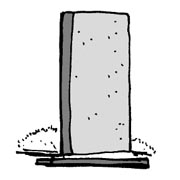 Some people don’t get to rest in peace even after their deaths. Eva Peron, who was revered as the saint of the poor during her lifetime, was one of them. When she died of cancer at the young age of 33, the entire nation went into mourning. A crowd gathered outside the presidential residence, and eight people were crushed to death in the congested streets.

Following the grand state funeral held in her honor, plans were made to bury the body beneath a large monument. But when President Juan Peron was ousted in a military coup, her body went missing and its whereabouts were not discovered for 16 years. The body was finally found in a crypt in Italy, buried under another name. But Evita’s remains would not return to Argentina until much later, when Isabel Peron, Juan Peron’s third wife, became president of the country. Yet, Eva Peron was still unable to find peace. Because she was the second wife of Juan Peron, her body was buried in her family tomb, not with her husband, according to Catholic tradition.

Former president of the Philippines Ferdinand Marcos still hasn’t found a final resting place. He was ousted as a result of the People Power Revolution and died from complications of lupus in Hawaii. His remains were returned to his homeland four years after his death, but burial in the national cemetery was denied. The honor has been offered to all other presidents of the Philippines but Marcos. His family and supporters are still protesting the decision. His body now lies in a glass coffin in the family residence, but because of the controversy over his burial he may not be resting quietly.

This year marks the 50th anniversary of the death of Albert Camus, the Nobel Prize-winning writer most famous for “The Stranger.” Camus is buried on a hill in the small town of Lourmarin in southeastern France, but the French government once had plans to awaken his soul. Camus was to be given the honor of being buried in the Pantheon along with great intellectuals like Victor Hugo and Andre Malraux. However, the plan was met with strong resistance from leftists who argued that Albert Camus had lived life as an outsider and, therefore, should not be included in the temple of the mainstream.

Hwang lamented the division of the nation until the day he died. In one poem, he wrote: “Who should I give my baggage to when I leave? How can I leave my beloved mountains and rivers and the separated people?”

He must be hoping that he will be laid to rest in his hometown after unification.