‘Going nuclear’ is not worrying in this case

‘Going nuclear’ is not worrying in this case

Construction of New Gori nuclear plants near Ulsan is almost completed. The first of the two nuclear plants began commercial production in August and will start full operation in December. Provided by Korea Hydro and Nuclear Power Co.

Becoming the sixth nation to win overseas orders for nuclear reactors, Korea is the rising power in the sector, analysts say.

A personal visit by President Lee Myung-bak to the U.A.E. and competitive pricing for the nuclear plants appeared to have clinched the deal for Korea, ahead of established competitors from France, the United States and Japan.

But the decision was also based on Korea’s ability to acquire extensive expertise in the industry even though its first nuclear plant began operation in 1978. 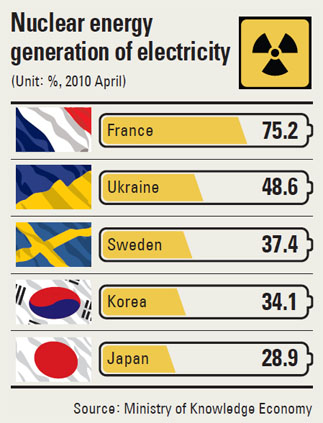 “The [potential for accidents in] local nuclear plants is only a fourth of that of France,” another big user of nuclear energy, said Park Goon-cherl, president of the Korean Nuclear Society and professor of nuclear engineering at Seoul National University. “This impressed the U.A.E. and that’s how Korea won the bid.”

Korea has also benefited from fortuitous timing, both when it started its own nuclear energy program in the 1970s and now as it seeks more foreign orders.

“Most Western countries were reluctant to build nuclear power plants, especially after the Chernobyl accident in the Soviet Union in 1986, but Korea continued to build nuclear plants because it desperately needed more electricity,” said Park.

Korea’s near-total dependence on imported fossil fuels for energy made nuclear power an attractive option. The nuclear industry’s downturn at the time meant that construction costs were low, giving Korea an opportunity to acquire the necessary nuclear technology, Park said.

Korea’s earliest power plants were based on technology provided by Westinghouse in the U.S. and Candu in Canada, but it introduced its own technology in the late 1990s with the Korean Standard Nuclear Power Plant and now with the more advanced APR-1400 reactors that will be supplied to the U.A.E.

The government now hopes to make the nuclear industry completely self-sufficient in technology by 2012.

The local nuclear industry’s decision to go abroad comes at an opportune time because of growing global interest in nuclear power as a safe, cheap and clean form of mass power generation.

Having won its first overseas contract, Kepco and its consortium partners are seeking to gain footholds in other regions. Korea recently signed nuclear-cooperation agreements with Argentina and South Africa, with Turkey expected to order a Korean reactor soon.