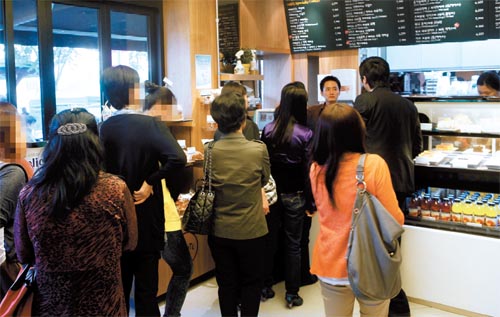 Defectors from North Korea queue up to order drinks at a cafe in Dongdaemun, central Seoul, on Oct. 6, during their first field trip to the shopping district on the third day of their three-week program at Dongbu Hana Center. By Jeong Chi-ho


Next month, the number of North Korean defectors living in South Korea will reach 20,000 - the largest ever. Some people, including President Lee Myung-bak, believe that unification of the Korean Peninsula is “inevitable,” though when and how that will happen are impossible to guess. These 20,000 migrants are, in essence, the very first stage of unification.

In this three-day series, the Korea JoongAng Daily takes an up-close look at North Koreans who have fled their Korea to settle in ours. Today, we follow defectors as they leave Hanawon, the state-run resettlement facility in Gyeonggi that all defectors are brought to - and have their first encounter with the real world outside North Korea. On page three, we provide a snapshot of the defector community, a portrait you may find surprising.


A group of nine Korean women is staring at a menu board at the entrance of a cafe in one of the gigantic shopping malls in Dongdaemun, central Seoul, on Oct. 6. A young woman facing the group explains different coffee drinks. “If you want coffee with nothing in it you can order an Americano. Cafe latte contains milk, and cafe mocha contains chocolate. If you want something sweet, cafe mocha is recommended,” says Lee Eun-chong, a social worker.

Despite her minutes of explanation, only three of them order coffee, with the rest deciding to have fruit smoothies. “Coffee is addictive. I am afraid once I get used to it, I will want it over and over again. It used to be a very expensive dessert in North Korea, and I couldn’t even try it back there,” says one.

These women, aged 20 to 60, are out on their first field trip on their third day at Dongbu Hana Center in Gwanak District, southwestern Seoul. During the trip, they learn how to order at a cafe, shop for clothing and use public transportation from two of the center’s social workers.

Before heading to the shopping district, they have a brief orientation session about using facilities at the National Medical Center nearby. Fees at the state-run hospital are as much as one-fifth the cost at other medical facilities, they are told.

Hana Center is an optional, part-time educational institution for defectors fresh out of Hanawon. While all defectors are sent to Hana Centers after finishing Hanawon, some choose not to receive additional help after the initial visit. There are 30 regional Hana Centers nationwide, including four in Seoul. Some Hana Centers are run by local welfare centers on state subsidies, while others are operated by local branches of the Republic of Korea National Red Cross. Dongbu Hana Center belongs to the latter.

To mark the 10th birthday of Hanawon last year, the Ministry of Unification launched Hana Centers to supplement the mother institution’s functions. Whereas Hanawon focuses on theories and knowledge about South Korea, defectors are encouraged to attend Hana Center for pragmatic lessons.

“We foster [defectors’] ability to cope with the social flow. During the initial period of settling here, North Korean defectors have minimal access to news, since they have no computers or televisions,” said Kim Jae-jung, head of Dongbu Hana Center.

In the first half of this year, 798 defectors graduated from Hanawon, and 603 of them, or 76 percent, finished Hana Centers’ three-week program afterward, according to Kim Jae-wung, an official at the Unification Ministry. Attendants of Hana Center receive 100,000 won ($89) in aid for the program plus free lunch during weekdays.

Earlier that day, 255 North Korean defectors had taken separate buses to Hana Centers across the country from Hanawon. They had stayed at Hanawon for the past three months.

For the nine women, following brief greetings from officials upon their arrival, the group is guided to local district offices to fill out forms for their resident registration number. Given only to South Korean citizens, the ID means the escapees have officially become South Koreans.

But they are more nervous than thrilled about their first steps into the world they had dreamed of entering.

None of them seems willing to speak or make eye contact with a stranger, let alone a South Korean reporter. Kim, of Dongbu Hana Center, says media access is generally prohibited in the first few days because the defectors are emotionally unstable.

With the IDs, the defectors are free to do anything and go anywhere in South Korea. But two-thirds of the latest batch of defectors to arrive at Dongbu Hana Center have opted for the final step to get better prepared for a fresh start: taking 60 hours of classes starting Oct. 4 for three weeks.

“I know I have to bear it, but the three months at Hanawon were so boring,” one says, frowning. “We had to sit in a room and listen to lectures from morning till evening every day. But it is so nice that we can now have free time outside and learn about real life here.”

After making their IDs on their first day out of Hanawon, the defectors apply for basic livelihood funds from the government and medical insurance. They then head to their new residence, a permanent public rental apartment in the same neighborhood as the Hana Center, accompanied by South Korean volunteers.

“We enter their new home together, clean the space for a while and have dinner at a restaurant nearby,” says Jang Hye-sun, who has volunteered at the Dongbu Hana Center for the past two years. “Real life begins from day two. I help them buy a cell phone, open a bank account, recharge a transportation card, shop at a market and walk around the neighborhood to get to know the area over the weekend. Since they have come here all by themselves, they need to shop for everything from spoons to chopsticks.”

The first day of formal education at Dongbu Hana Center kicks off with an oath-taking ceremony. “We make an oath to do our best in attending the adjustment education and settling ourselves down in the community,” one of the trainees reads aloud.

Then Lee Eun-chong, the social worker, explains garbage recycling methods, public transportation and cell phone manners. A famous K-pop song rang aloud in the middle of the class. A 24-year-old woman, the youngest in the group, took her cell out of her handbag, whispered into it for a moment and put it back.

Apparently she has unaware that cell phone usage in a public venue is considered impolite. “You are not supposed to talk on the phone in a class. Please shift it into vibration mode by pressing the button with a asterisk,” says Lee.

On the third day at the center the Korea JoongAng Daily was allowed to accompany the defectors and speak to them on a field to trip to Dongdaemun. None wanted her photo taken, nor did any want to give her real name, because the defectors were nervous about their identity being exposed. Many still have siblings back in the North, and authorities there tend to punish the remaining families of escapees.

But most of the women end up carrying on a conversation with the reporter. They not only answer questions but are quite curious about life in South Korea. One of them asks if becoming a member of an artistic performance troupe of North Korean defectors will earn her “heaps of money.” When told the job may not make her rich, she then asks what jobs will.

“I just love this freedom I have gained. What worries me most is getting employed soon. I want to make a lot of money,” says the woman, who seems to be in her early 40s. Wearing a shiny purple blouse with frills, solid gold rings and bracelets and crystal earrings, the woman is reluctant to reveal her occupation back in the North.

Kim Jung-whan, another social worker from the center, tells the reporter later that the relatively more fashionable defectors are those who have lived for a long period in China after from the North.

Another woman in her late 30s bursts into a childlike smile when asked about the trip to Lotte World amusement park a day earlier as part of Dongbu Hana Center’s second day. “It was such a paradise on earth. I [want] to visit it again,” she says.

Yesterday, a day before wrapping up the three-week session, the defectors baked bread and cookies. The products were delivered to a South Korean women’s shelter run by the Gwanak District Office, where a dozen female victims of domestic violence stay. Through the occasion, the defectors become donors, not beneficiaries, for the first time in South Korea.

Baek Ok-seon, a social worker at the Gwanak women’s shelter, says the event helps raise awareness of domestic violence issues in South Korea. It is something many of the female escapees might have lived with as a fact of life back home. One difference they can now realize, Baek says, is that they have a place to turn to here, whereas they might not in the North.

“They also learn that they are not destined to live here as recipients from South Korean society and should live as donors for those in need,” says Lee of Dongbu Hana Center. “That, we think, will motivate them to have a fresh start on a second life.”