What lies ahead: Defectors with determination

What lies ahead: Defectors with determination 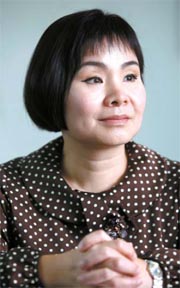 In the past two days, the Korea JoongAng Daily has taken an inside look at the phenomenon of defectors: refugees from North Korea who have braved danger and often abandoned families to find a better life in South Korea. The defector community will hit 20,000 next month, milestone on the road to eventual unification.

Hanawon is the state-run settlement support center that teaches North Korean refugees how to start their new lives in the South. All defectors go through the Hanawon orientation process.

President Lee Myung-bak recently said that unification of the two Koreas was an “inevitability.” In this interview, Hanawon’s Director General Youn Mi-ryang said her institution will have an even bigger role in the unpredictable future of a unified Korea. The current Hanawon, she said, is trying to be faithful to its goal of teaching the basics about South Korea, answering criticism that the organization is slow to come up with more efficient programs for defectors.

Youn said the center is changing all the time to improve programs, and a second Hanawon - to be built by 2012 - will be a significant help to its mission. English classes for defectors will also be enhanced for them, she said.

The interview was conducted on Oct. 6 at Hanawon in Anseong, an hour south of Seoul. Excerpts of the interview follow.


Q. Next month is fast approaching, when the number of North Korean defectors to come to the South will reach 20,000. Are there any changes that Hanawon will adopt as part of recognizing this milestone?

A. I won’t say it is a change triggered by the dawn of the era of 20,000 North Korean defectors. Over the past 11 years [that Hanawon has existed], Hanawon has constantly changed. The curriculum was overhauled nine times, many of the changes reflecting the demands of defectors and the necessities of our society. We survey our defectors on a regular basis, and based on the feedback, we try to reflect it in our programs. The latest such effort was the ninth revision in April and May, when we bolstered job training programs.

What will Hanawon be like five or 10 years from now?

Any predictions would be linked to the condition in North Korea. So it is not easy to tell, in particular as an employee of the Ministry of Unification. But as I said earlier, Hanawon will be able to continuously change to reflect the demands of defectors and the people of South Korea. And five or 10 years from now, I think defectors will feel more comfortable settling in the South than now.

Hanawon was built to help defectors. So will it cease operations once the Koreas unify?

This organization is not supposed to last forever, but as we saw in the case of Germany’s unification, it will be required to play a role for some time after unification. Even in Germany, 20 years after unification, people from the two Germanies are still psychologically different. Hanawon, I think, will have to fulfill the role of providing “integration education” for leaders from both sides of the Korean Peninsula. In particular, Hanawon will focus on being a key education organization for young North Korean leaders.

What will be the role of the second Hanawon?

The second Hanawon facility that we plan to build in Hwacheon, Gangwon, by 2012 was initially supposed to be a facility for adult male defectors. But we are expanding the plans and hoping it will be a facility where intellectuals from the North are educated. College graduates who used to be teachers, doctors and ranking officials within the [Workers’] Party are coming to the South, but the Hanawon education is insufficient for them to take advantage of their knowledge.

North Korean doctors, for instance, have difficulty practicing medicine here. We are currently giving them qualifications to take the national examination to become a doctor. But due to the lack of studying facilities and support, it is very difficult for them to study for the exam.

The second Hanawon will also arrange regular re-education programs so that defectors can continue to be educated even after graduating from Hanawon. In the beginning, we only gave them a very basic education. Now, we are improving programs to help them become the people our society needs.

There is criticism that the current curriculum at Hanawon is theoretical and provides little practical help about problems they will face outside of the North. What do you think?

There are some reasons why it has to be theoretical. Many defectors believe that South Korea is a U.S. colony and that the Korean War was started by South Korea. They had also been educated to idolize Kim Il Sung’s family, and we need to correct it. As to the political system and law and order here, we need to educate them. In North Korea, having money or connections inside the Workers’ Party make it all happen. We need to teach them it is not the case here.

South Korean history and language ... these are indispensable for them to learn. Teaching those subjects only requires about 150 hours. While one might get the impression that what we teach is too rigid or theoretical, they are the minimum requirements they need to know as South Korean citizens.

Out of the 420-hour Hanawon curriculum, 180 hours are reserved for activities outside of Hanawon, including a tour of Seoul. They ride the subway and visit colleges as part of job training. Because of this, we believe the criticism that it is overly theoretical is inappropriate.

There are many problems facing defectors, but the lack of English proficiency is one that stands out. Do you have a plan to improve English education?

English is a subject that only a small portion of defectors say they need. In addition, it is hard to teach English effectively, it is hard for us to come up with an English education that satisfies all. We are providing extracurricular English classes to those who want it, before or after the regular classes. We also have some foreign volunteers who come here to teach conversational English. If the second Hanawon is built, we will be able to divide people into smaller groups for advanced English lessons.

We hear that some defectors are unsatisfied with South Korea. Why is that?

They speak with very hostile words, and that makes South Koreans uncomfortable. It is one of the reasons that we stress language education at Hanawon. It is also true that our society has a biased opinion of them - that they are too poor and socially backward to mingle with. But I want the South Korean public to think differently. Many of the defectors didn’t have a choice but to come here, chased out by Chinese authorities.

What do they say about Kim Jong-un?

Defectors are baffled about the news. Kim Jong-il became the top leader only after a long period of time. They said it made no sense that a person they barely knew became a four-star general.