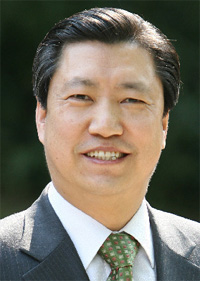 Min Dong-seok, a trade expert who headed the controversial 2008 negotiations to reopen the Korean market to American beef, was named a vice foreign minister yesterday.

The appointment of Min as the second vice foreign minister came as Chun Yung-woo left the post to serve as the senior presidential secretary for foreign affairs and national security earlier this month.

Min, who currently heads the Office of Diplomatic Competency Assessment at the state-run Institute of Foreign Affairs and National Security, is the first trade specialist to reach the vice minister post since the foreign ministry was reorganized to put more emphasis on the trade issue in 1998, Kim Hee-jung, presidential spokeswoman, said.

“We have high expectations that Min will serve in the role to bridge diplomacy and trade,” Kim said.

A native of Haenam, South Jeolla, Min majored in Russian at the Hankook University of Foreign Studies. He passed the foreign service exam in 1979 and served in key trade posts at the foreign and agriculture ministries. The Blue House said Min, 58, spent most of his career as a trade specialist since he joined the ministry in 1979.

Under the Roh Moo-hyun administration, Min served as the senior representative in the field of agriculture during the Korea-U.S. free trade negotiation in 2007.

In 2008, under the Lee administration, he was the chief negotiator of Seoul in a deal with Washington to reopen the nation’s beef markets to U.S. imports. The action, however, prompted serious protests among Koreans fearing mad cow disease, forcing the Lee administration to renegotiate some of the terms. In July that year, Min voluntarily left the government job, assuming responsibility.

“Although he faced many challenges, Min had been unshaken in his convictions as a public servant, although he suffered personal disadvantage from it,” Kim said. “His appointment as the vice foreign minister was taken in consideration of his action. It is to give a second chance to such a committed public servant,” Kim said.

Kim also said Min will contribute greatly to the Foreign Ministry’s reform efforts in the aftermath of the nepotism scandal and other allegations of favoritism, because he has career experiences outside the ministry, including the agriculture ministry. “With his objective perspective, he is expected to play a significant role in bringing about important changes in the Foreign Ministry,” Kim said.

According to Kim, President Lee has decided to keep First Vice Foreign Minister Shin Kak-soo for the time being because Lee believes it would be undesirable for the ministry’s head and deputy head to be replaced right before the G-20 Summit next month. “Shin recently expressed his intention to step down, but he will remain until ambassadors are reshuffled early next year,” she said.

Following the hiring favoritism scandal at the ministry, including the daughter of then-Foreign Minister Yu Myung-hwan, both Yu and Shin expressed their intention to resign. Yu was recently replaced by Kim Sung-hwan, who was senior secretary to the president for foreign affairs.

The Democrats condemned the president’s decision to give Min a second chance. “Min shocked the nation with his remarks that the beef negotiations were a U.S. gift to Korea,” said Lee Chun-seok, spokesman of the opposition Democratic Party.