Madonna concert buzz looks a lot like a prayer

Madonna concert buzz looks a lot like a prayer 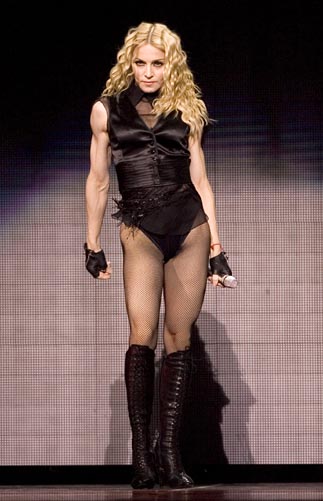 Madonna performs during her “Sticky & Sweet Tour” at the Wachovia Center (now Wells Fargo Center) in Philadelphia on Nov. 20, 2008. Although she has toured Japan and China, she has yet to perform in Korea. [AP/YONHAP]

The news that Madonna will hold her first concert in Seoul next May made headlines in the Korean media over the weekend.

But some Korean entertainment insiders are doubtful about whether she will really be able to add her name to the list of pop superstars that have come to Korea in recent years - names that include Beyonce, Billy Joel and Stevie Wonder.

On Spot E Korea, which claims to be the Korean branch of the U.S.-based firm On-Spot Enterprises, said on Sunday it has “finalized talks with Madonna to proceed with her concert in Seoul in May,” but that “details related to the concert date, schedule and security policies are still under discussion.”

It added that it had formed a partnership with Korean company Again Don Quixote in early October to prepare for the event.

But industry insiders say that On Spot E Korea’s announcement - which, at six months in advance of the actual dates, is much earlier than most concerts involving major-label pop stars - is a stunt to beat out local competitors, rather than being based on fact.

Koreans fans have waited a long time for a concert by the “Queen of Pop.” She has toured neighboring countries like Japan and China but has yet to come to Korea.

Given the revenue such a concert would bring, concert promoters have long fought to bring her here.

One possibility, according to a source well acquainted with the situation, is that On Spot E Korea has not actually finalized a concert deal but is buying time so that rival bidders will give up.

“The way the firm could sign her would be to take advantage of the time vacuum to round up investors," said the source.

On Spot E Korea has a history of canceling heavily publicized events. It was scheduled to hold an event called the “On Spot Hip Hop Festival” on Oct. 30, but it was cancelled less than two weeks before the festival. The company promoted the event by advertising the appearance of U.S. hip-hop stars such as T-Pain.

On Oct. 28, the company claimed that actor Kevin Bacon would show up at a press conference in Seoul the following day to announce he would be filming the movie “My Life, My Secret” in Korea. But only 30 minutes before the event was scheduled to begin, the company sent out a notice saying that it could not verify whether Bacon had gotten on a plane to Korea.

On Spot E Korea could not be reached for comment.

But even if the news about Madonna isn’t true, Korean pop music aficionados don’t necessarily have to be dismayed. A chain of concerts organized by other concert promotion companies stretching into February have already been confirmed.

Olivia Newton-John will return to Korea for the first time in 10 years for concerts on Dec. 6-7. The concerts are part of a world tour commemorating the 40th anniversary of her debut. Since churning out hits in the 1970s and early 80s, the four-time Grammy Award winner has become an activist for environmental and animal-rights issues. She has also become an advocate for breast cancer awareness after surviving cancer herself in 1992.

At her concert in Seoul, she will perform such hits as “Let Me Be There,” “Summer Nights,” “Magic” and “Physical,” according to concert organizer Culture View. The concert will be held at Kyung Hee University’s Peace Hall and tickets range from 99,000 won ($89) to 330,000 won.

On Jan. 9, Ryuichi Sakamoto, whose score for Bernardo Bertolucci’s 1987 film “The Last Emperor” won an Academy Award, will give two recitals, at 4 and 8 p.m., at the Concert Hall of Seoul Arts Center in southern Seoul.

At the concert, his first in Korea in 11 years, Sakamoto will use two pianos to play pieces from his latest album “Playing the Piano” (2009). One will be an acoustic Yamaha piano and the other will be programmed to follow the lead of the acoustic piano, according to Vincero, his concert agency. Tickets range from 50,000 won to 160,000 won.

Lastly, U.S. country-pop singer-songwriter and actress Taylor Swift will hold her first concert in Seoul on Feb. 11. The 20-year-old pop diva has won four Grammy Awards despite having released only three albums since her debut in 2006. She released her third album “Speak Now” on Oct. 25 and the Seoul concert is part of her world tour celebrating the album’s release. The concert is scheduled for 8 p.m. at the Olympic Gymnastics Arena in southeastern Seoul. Tickets are priced between 88,000 won and 99,000 won.