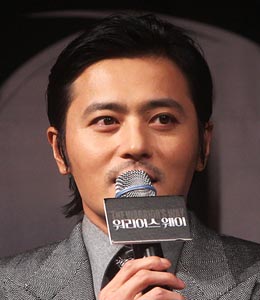 The marketing campaign for actor Jang Dong-gun’s first Hollywood film “The Warrior’s Way” is getting underway with distributors in the United States and Britain using Korean distributor SK Telecom’s poster for their ad campaigns.

The poster was unveiled at a press screening for the 15th Pusan International Film Festival last month. It has been chosen as the official movie poster by the U.K.’s Entertainment Film Distributors Ltd. and American distributor Relativity Media.

“The poster portrays Jang and the other characters well. It is very well-made,” SK Telecom quoted Relativity Media as saying in a statement on Nov. 1.

The Warrior’s Way is about a swordsman, played by Jang, who has retreated to an American town in the desert but is forced to fight again to protect the people he loves.

It will open in theaters in the both United States and Korea on Dec. 2.