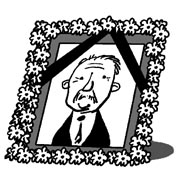 No matter who you are, death is an unavoidable fact of life. Philosophers and religious leaders have tried to find meaning in death since time immemorial.

They say that death is the most difficult for the living, who hold burial services to ease their pain and say goodbye to the deceased.

Funerals are an essential ritual for all of the cultures of the world, reflecting the unique geographic conditions, religious beliefs, lifestyle and values of a given society.

But although funeral customs may differ from place to place, the purpose is to ensure the dead ascend to paradise. In Tibet, a burial is for the lowest members of society. The elite had a “sky burial,” which involved letting eagles feed on the corpse. An ethnic minority in China would hang coffins on the side of a cliff to pray for ascension and eternal rest of the deceased.

Korea’s funeral culture is based on filial piety. Ancient Koreans believed that holding a proper funeral for parents was no less important than serving them while they were alive. In “Gyeokmong-yogyeol,” prominent Joseon scholar Yi I, whose pen name was Yulgok, quoted Zeng Zi: “Men should hold funerals for their parents with devotion.”

The funeral was also important in the Goryeo period. “Goryeosa,” or History of Goryeo, says: “When a person passes away, the family invites a shaman or Buddhist priest to perform a funeral. They place offerings on the table and hold a ceremony, ringing bells and beating drums to send the spirit of the deceased to paradise. Sometimes they even spend their entire fortune on the ritual.” That’s because the funeral was the most important of all matters related to human life.

The custom of creating a grass tumuli for the deceased grew out of the practices of the island regions along the southern coast. When a parent died, their fisherman sons would create a temporary tumuli so that a proper funeral could be held when they returned from sea.

In every era, in every country, the funeral is a solemn rite not to be tampered with. But a recent spate of scandals has tarnished this most sacred of rituals. In the most recent, the chairman of Hyundai Jonghap Mutual Aid Society was arrested for embezzling 13.1 billion won in company funds, depriving many people of the chance to provide a proper burial for their families.

It is time that people stop tampering with funeral funds and give this ritual the respect it deserves.