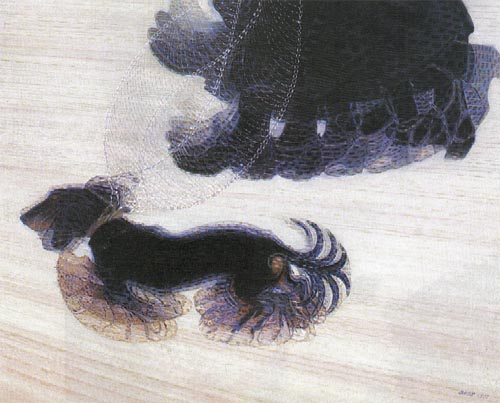 ‘Dynamism of a Dog on a Leash’ (1912) by Giacomo Balla. Oil on canvas. Albright-Knox Art Gallery, Buffalo, New York.


Whenever I look at the painting “Dynamism of a Dog on a Leash,” by Italian artist Giacomo Balla (1871-1958), I can’t help but smile. The dog’s feet and the woman remind me of the Coyote’s ever-lasting pursuit of the Road Runner in Looney Tunes cartoons.

Balla himself must not have made this painting without a smile. Still, it is a serious painting rather than a joke. This piece is a result of the struggles that artists in the early 20th century went through to express the high speed of modern society.

Inspired by Etienne-Jules Marey’s photos, in which several consecutive phases of movement by an animal or human were recorded in each frame, Balla included a number of afterimages of feet, tail, leash and other moving things. These afterimages help viewers feel the speed and dynamics of moving objects that cannot be felt in ordinary paintings.

Seeing Balla’s painting, viewers are sure to chuckle as they recall images of a short-legged Dachshund scurrying to keep up with its owner.

Balla and other artists of the early 20th century were feeling a need to create new images in the midst of their suddenly-changed visual environment. Their surroundings no longer stood still for hours as in the landscape paintings of the old masters.

The artists of the early 20th century felt the need to find ways to effectively depict such dizzying new visual experiences in their works and to show new perspectives and compositions that were different from photographs in order to compete with the new art form.

What has followed since are paintings that are seemingly inscrutable in their depictions of objects or who knows what - in other words, modern art. 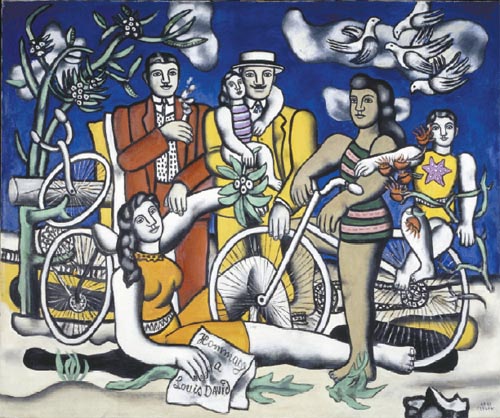 
In the early 20th century, there were two representative groups of artists who experimented with reconstructing their visual experiences in their work. The first group was the Cubists, including Pablo Picasso (1881-1973), who worked mainly in France. The second was the Futurists led by Filippo Tommaso Marinetti (1876-1944) in Italy. Balla belonged to the latter group.

Picasso’s Cubist paintings show a combination of views from the front, side, top and other angles that, together, create a synthetic image.

On the other hand, the Futurists focused more on the dynamism of moving objects. They showed this through the use of afterimages and by overlapping the objects.

The Futurists were enthusiastic about the speed, power and freshness of the new machine civilization. They not only despised but nearly rejected classical art and all old things.

In truth, the attitude of the Futurists was far removed from the cuteness in Balla’s Dynamism of a Dog on a Lease. These artists were like immature teenagers obsessed with speed, and they had a kind of fantasy about extreme events in which old things would be destroyed and a revolution of speed and force would occur - in other words, what they dreamed of was war.

In his 1909 “Futurist Manifesto” Marinetti said, “We want to glorify war - the only cure for the world.” 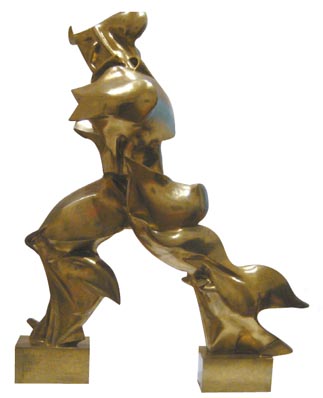 Another futurist artist, Umberto Boccioni (1882-1916), was so moved by this philosophy that he decided to participate in World War I. He died before the age of 34.

I would be curious to know whether Boccioni maintained his positive view about war even at the moment of his death.

Boccioni’s death was a big loss for the art world because he was such an excellent artist. His sculpture “Unique Forms of Continuity in Space” shows a human form walking. The figure’s afterimages are depicted as contours along the back, extended and blown out of proportion.

The sculpture’s outline looks as though the material is fluttering lightly in the wind, even though it is made of heavy bronze. This enables viewers to feel the power that drives such a heavy object forward. The artist’s skill is truly worthy of respect.

Although the Futurists were creative like that, they have not gained as much recognition as the Cubists in art history. That is probably because the Futurists were advocates of war, and Marinetti supported the Fascist Benito Mussolini - a fact that makes him worthy of the scorn from those who experienced the miseries of the Second World War.

Some art historians point out that, during the time when the Futurists were active, Italy was falling behind in industrialization compared to other European countries. That could be the reason why the Futurists were unable to see the dark side of the machine age.

But the Futurists of Italy were not the only artists to fall in love with machines. The French Cubist Fernand Leger (1881-1955) had a positive view of the machine age.

Leger, a socialist, believed that the machine age would give workers more free time, rather than eliminating their jobs, as others believed. He even depicted human figures as machines in his paintings.

His painting “Leisure: Homage to Louis David” reflects this view. The painting is known in Korea because it was included in a special exhibition from La Musee National d’Art Moderne du Centre Pompidou two years ago.

Leger escaped to the United States when World War II broke out. While he was there, he was seduced by America’s capitalistic civilization. In particular, he was attracted by the “indecent” clothing worn by Americans on outings - brightly colored sweaters or short pants for hiking and bicycle trips - which are all reflected in the painting.

Leger’s painting reflects both his socialist ideology and his experience in America.

According to the Pompidou Centre, the painting was made in support of paid vacations for workers. By introducing the idea of the paid vacation, he is hoping that workers will be able to enjoy leisure, which was previously the privilege of noblemen and the bourgeoisie, and that an Arcadia would be created for them.

The many environmental artists of today make us believe that artists have always been against the idea of a machine civilization.

But it’s easy to forget that there once were artists who loved machines. In fact, it was their life’s work.