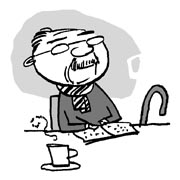 They say that as you get older, your mind starts to slip. But it is more than the mind that is lost. Old people begin to fade into the background as their younger, faster and more beautiful counterparts move up in the ranks.

Art is one area in which old people continue to work, and garner respect, as though their age were not a factor. Many artists have demonstrated a tremendous ability to produce great works of art even after their bodies are bent with age.

Michelangelo Antonioni, an Italian modernist film director who passed away three years ago, is one of them. At the age of 83, he produced “Beyond the Clouds” with partial help from German director Wim Wenders. For more than 10 years, Antonioni had suffered from the aftermath of a stroke. He was paralyzed and could not speak. But he continued to direct, shooting on location on a wheelchair pulled by his wife and communicating by writing. He even completed two films in his 90s.

In the East, we have Akira Kurosawa, a Japanese film director who is called the “emperor of films.” When he won the Palme d’Or at the Cannes Film Festival with “Kagemusha” in 1980, he was 70 years old. He received a standing ovation at the awards ceremony and went on to say that he would work harder to present a better movie next time. True to his word, he produced his masterpiece “Ran” just five years later. Five years after that, at the age of 80, he was honored with the Lifetime Achievement Award at the Academy Awards - a first for an Asian director. Again, he left the audience speechless when he said, “I have produced films for more than 50 years, but I still don’t know what a movie is.” Kurosawa was full of energy and directed one film per year even after becoming an octogenarian.

In another example of excellence in age, Gabriel Garcia Marquez, who won the Nobel Prize Literature, is said to be preparing to release a new novel soon. He is 83, the same age Antonio Stradivari was when he crafted the best instrument of his lifetime. That means that Marquez, who has not yet recovered from lymph cancer, still may not have created the work of his life.

Euripides, who once said that the aged are nothing but voice and shadow, would have been pleased to know that his words still hold weight in our society. But it was Sophocles who said that there is no one who loves life more than the aged - and he was right.