A window into different cultures

A window into different cultures

From left: The British Council Gwanghwamun Centre, the Goethe-Institut Korea (Germany) and the Japanese Cultural Center By Shin Hwa-seop


Seoulites don’t have to go far for a taste of foreign culture. The city’s cultural centers have for decades been sanctuaries of far-off lands, providing an inexpensive way to experience the exotic - and learn something new.

In fact, during the days when military authoritarianism severely oppressed Koreans’ civil liberties, the French and German cultural centers provided a window into a different world.

“It was difficult to find a proper English academy at the time, so I joined a conversation club at the British Council Gwanghwamun Centre,” stated a Korean diplomat who attended university during the mid-1970s. “For a taste of European cinema, I went to the screening room in the basement of the French Cultural Center.”

These days, the cultural centers are popular destinations for young students during their holidays.

It’s an economical way for youth to soak up different languages and cultures. The sizeable collection of books, magazines and films at the centers can also offer adults an opportunity to escape their daily routines and learn something new.

In Seoul, there are seven officially recognized cultural centers. The United States, Germany, England, France, Japan, China and Italy have their own government-sponsored centers. Plus, there are many more that have been established with private funding.

Most of the cultural centers are easily accessible using public transportation, and some are surrounded by notable tourist destinations. 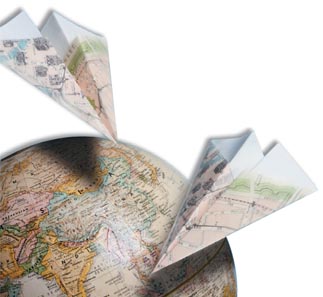 Established in Seoul 42 years ago, the French Cultural Center is one of the oldest cultural centers in the country. Located on the 18th floor of the Woori Building near Namdaemun in central Seoul, it offers plenty of activities for visitors.

The center boasts a French restaurant called Cafe des Arts and a large collection of books and DVDs.

“We have over 10,000 books and magazines as well as 1,600 music CDs,” an employee working at the media display corner said.

Through DVDs, visitors can also get a glimpse of different regions in France as well as famous tourist destinations like the Louvre Museum. To utilize the French Cultural Center, a one-year membership must be purchased, which costs 60,000 won ($54.06). Membership allows visitors to sign out four items for two weeks at a time.

The French Cultural Center also offers various events and classes. There is a reading club as well as French language classes for children and students ranging from nine months to 16 years old.

For those thinking of studying in France, the center also offers information on different study abroad programs.

In addition, weekly screenings of French films are held at the Dongsoong Arts Center in Dongsung-dong, central Seoul, on Tuesdays at 8:20 p.m. Cafe des Arts offers set meals for 20,000 won during lunch hours. Crepes, wine and coffee are served during the afternoon.

Goethe-Institut Korea, or the German Cultural Center, has been housed at the Seoul Square Building adjacent to Seoul Station since June, while the original center located at the foot of Mount Namsan undergoes renovations.

Its library contains a collection of over 10,000 German books, Korean translations of German literature, as well as newspapers, magazines and children’s books. The library is set in a tranquil environment and offers a scenic view of the Millennium Seoul Hilton’s garden.

Screenings of German films take place on Fridays at 7 p.m. on a biweekly basis. The center also offers a large variety of German language courses - 30 in all - for students ranging from novice to expert. Membership is free.

Located on the fourth floor of the Heungkuk Building on Shinmunro, central Seoul, the British Council Gwanghwamun Centre is always teeming with English-language students.

Visitors can get a glimpse of British newspapers and magazines in the library, which offers views of the Seoul Museum of History and Gyeonghui Palace.

The library contains novels as well as books published by the Oxford Publishing Company. The collection is available for everyone, but only those attending the center’s English-language courses can sign out the books. Free trial classes are available for those interested in attending the language classes.

Located in Naeja-dong next to the Seoul Metropolitan Police Agency, the China Cultural Center puts on performances, offers lectures and holds symposiums. There is a weekly screening of Chinese films on Fridays at 2 p.m.

The exhibition hall offers an ongoing photo exhibition about Shanghai. A changhwa - or Chinese window decoration - exhibition will be held starting Nov. 17.

A library is located on the fourth floor of the building, offering visitors access to a large collection of books and magazines and free Internet service.

The area itself is rich in history. Named after Naejasa, a Joseon Dynasty era government office, which supplied grains, liquor and fruit to the royal palaces, there are plenty of places to visit in Naeja-dong aside from the China Cultural Center.

A short walking distance from the cultural center is Sajikdan, a neo-Confucian altar for state deities. Further down the path behind Sajikdan is Hwanghakjeong, the last Joseon-era archery training ground. The archery range offers demonstrations by people dressed as Joseon period archers firing arrows on a target about 145 meters (476 feet) away.

Unlike other cultural centers, Chinese language courses and tai chi lessons are offered free of charge. Four levels of language classes ranging from novice to expert are available throughout the week.

The Japanese Cultural Center is located steps from Anguk Station, exit 4. Despite the intimidating metal detector at the entrance, the rest of the cultural center gives off a peaceful atmosphere.

The center’s library could give city-run libraries a run for their money, boasting a collection of 60,000 books and magazines. Visitors can also get a sampling of the latest music and films from Japan in its audio/visual room.

The exhibition halls on the second floor offer various exhibitions ranging from traditional to modern motifs.

At the New Century Hall on the third floor, Japanese films, from classic black-and-white to the latest DVD releases, are screened three to four times a month at 3 p.m.

The center offers the most up-to-date information and documents on the United States in Korea, including about 3,600 books, 1,100 DVDs and 500 children’s books. Since the center does not offer language classes, it is not as busy as the British Council Gwanghwamun Centre.

Like the Mongolian, Israeli and Azerbaijan culture centers, the Turkish Istanbul Cultural Center is not state-sponsored, but was established with the help of a corporate sponsor.

Nestled in the residential area near Yeoksam Station in southern Seoul, the basement of the house is used as a meeting and gathering space while the first floor holds information pamphlets and books on Turkey. The second floor has displays of traditional Turkish garb, ceramics and other items.

“I’m currently focusing my studies on music composition, and because I’m interested in Middle Eastern musical instruments, I’ve been coming here a lot,” said Lee Jung-hoon, a second-year student at Korea Art High School. She then gave a demonstration of the sipsi, a Turkish clarinet-like woodwind instrument.

The center offers tea parties and cooking classes at the end of each month. Those interested can reserve a spot online or by calling the center. 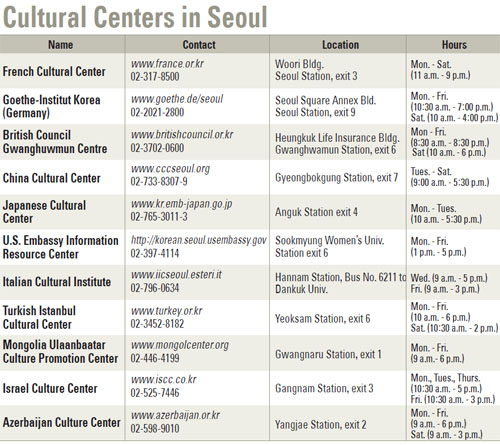