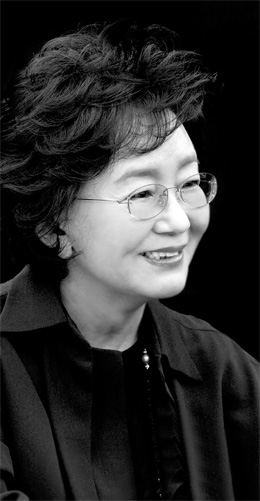 Veteran television writer Kim Soo-hyun is no stranger to controversy. And by bringing the taboo subject of same-sex relationships to prime-time television in Korea, she once again thrust herself into the spotlight.

In the SBS drama “Life is Beautiful,” which came to a close this Sunday, Kim brought up the issue of gay relationships to an audience that had rarely, if ever, given them any thought. Along with this, other touchy subjects such as abortion and adultery were addressed in the 63-part series.

“This is the face of any family,” said Kim in response to criticism of the television show in a recent one-on-one interview with the JoongAng Ilbo. “When there are many people in a family, there is the possibility to have a gay member. I did know that I could touch a sensitive spot, but I never intended to make this much controversy. This is simply an issue that can be raised in any household.”

Life is Beautiful centers around a family of four generations that runs an inn together on Jeju Island. On the outside, they are like any other family in Korea. But behind closed doors, the family struggles to deal with one of the most taboo topics in society when they learn that Tae-seob is gay.

“I don’t think sexual orientation is something that you can control. It’s simple - I don’t like discriminating against others,” Kim said.

But as averse as she is to discrimination, she said the rest of Korean society is still very closed to openly gay people. The drama reflects this. By the end of the series, Tae-seob’s family had been made aware of his sexual orientation, but his relationship with Gyeong-su, who works at the hospital with Tae-seob, was kept a secret from colleagues.

“If I had let their hospital colleagues know, it would have been too cruel for the couple,” Kim said. “It’s very different revealing this sort of thing to your family and to society in general. Many gays have more difficulties coming out to their family, but I think when your family accepts you, it would become a lot easier for society to do so as well.”

She revealed that some viewers told her they have come out to their families after watching the groundbreaking drama.

Because Life is Beautiful digs deep into modern relationships - perhaps deeper than most people care to look - not everyone was receptive.

A national mothers’ group, for example, ran an advertisement in the Chosun Ilbo, one of the top three newspapers in the country.

The September ad said: “When my son becomes gay and is inflicted with AIDS after watching ‘Life is Beautiful,’ SBS should take the blame.”

In another instance, this one slightly more baffling than outrageous, gay-rights groups were up in arms when the Ministry of Justice banned the drama from Korea’s prisons. Officials said they were concerned the show might “negatively affect prisoners.”

Not surprisingly, Kim takes a much more liberal position.

She fervently opposed editing out any scenes that were deemed too sensitive, including one particular scene in which the gay couple promises their undying love for one another inside a Catholic cathedral.

“The Catholic Church now isn’t what I thought it was,” Kim said.

“A cathedral is a place where even a murderer can find sanctuary - but I guess gays can’t. Actually, I was more angry at the television network because it should be the one doing all it can to alleviate discrimination, not chickening out.”

Even with the uproar the show created among conservative parts of society, the drama recorded an average rating of 19.1 percent, according to AGB Nielson Media Research.

Kim emphasized that she is especially appreciative that so many viewers tuned in to watch Life is Beautiful.

“Many avoided watching, just because of the issues it dealt with,” Kim said. “But at the same time, those who were able to maintain a bigger perspective on things complained that there weren’t enough shots of Gyeong-su and Tae-seob’s lovey-dovey moments.”

She is quick to emphasize that the show is not only about Gyeong-su and Tae-seob’s relationship.

She allocated more screen time to the relationships of other characters because she didn’t want the focus of the drama to be squarely on sexuality - there were a lot more stories to tell, Kim said.

“All characters that I showed had their own attractive qualities and you just couldn’t hate them,” Kim said. “I think it’s only up to you to decide whether life is beautiful or not.

“We tend to hurt others without intention, but all you need to do is be truly sorry and ask for forgiveness. When you are able to embrace others and their faults, wouldn’t life be beautiful?”

The famed writer received some pressure from producers throughout the show’s lifespan, but she refused to make the show something it was not.

Using Twitter as a mechanism to voice her concerns - Kim said she’s pretty hip for a 67-year-old woman and keeps up with all the modern trends, including Twitter. She posted that she was asked to change certain aspects of the show’s direction so it could gain a higher market share in its time slot.

“The production company, hungry for ratings, had asked me to send Gyeong-su and Tae-seob somewhere far away in the middle of the drama,” she posted on Twitter after the last episode.

“I just won’t take that kind of obsequious attitude as a writer until the day I die.”