Marcia was not exactly original but still a hit

Marcia was not exactly original but still a hit 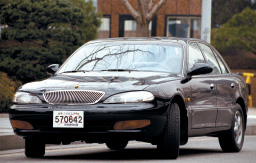 The sleek Hyundai Motor Marcia marked the beginning of a new segment: the luxury midsize sedan.

Marcia, which means “march” in Italian, was the first midsize luxury sedan in Korea and led to the creation of other vehicles in the same segment such as Hyundai’s Grandeur, Renault Samsung Motors’ SM7 and Kia Motors’ K7.

The Marcia was launched in March 1995 and was based on Hyundai’s Sonata II midsize sedan. Although it was almost the same size as the Sonata, its interior was comparable to that of luxury vehicles.

Hyundai said it introduced the Marcia for those who had driven midsize sedans, but had difficulties switching to full-size luxury cars. Hyundai wanted the Marcia to become a stepping stone between the two types of vehicles.

It took four years and just 60 billion won ($53.9 million) to develop the Marcia. It was first introduced with a 2.5 liter engine and was priced at 24.4 million won.

Because it was developed as a luxury sedan, the Marcia was equipped with dual airbags and an electronically controlled suspension.

The Marcia was a hit when it was released. Just over 4,000 units were sold in the first three weeks it was on the market in 1995. Hyundai said most buyers were high-income professionals and company executives in their 30s, 40s and 50s.

Hyundai introduced the 2.0 liter version of the Marcia seven months later. It was priced far lower at 15.2 million won.

But the Marcia was criticized for being a copy of the Sonata. According to industry insiders, automakers developed vehicles similar to others because it saved costs. Developing a completely new model could cost up to 500 billion won at that time, but by modifying the exterior and launching it as a new model, cost could be cut to as little as 50 billion won.

Despite the criticism, the Marcia sold well. It was a significant year for Hyundai, as its market share came close to 50 percent due to soaring sales of new vehicles such as the Marcia, the Accent and the Sonata II.

The Marcia was discontinued in 1998 when it was replaced by the Grandeur XG.