The autumn of our discontent

The autumn of our discontent 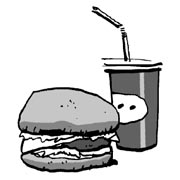 The Big Mac, a signature product of the international fast-food chain McDonald’s, consists of two 1.6 oz (45.4 g) beef patties, iceberg lettuce, American cheese, pickles, onions and a secret sauce, all served on a three-part sesame seed bun. Nowadays, this high-calorie hamburger, which could almost be called the Americans’ “national dish,” is sold by the millions worldwide every day. Yet that has not put an end to complaints that the Big Mac has conquered the world’s dinner table.

A group of French farmers were the first to take action against the chain. One summer’s day in 1999, they dismantled a McDonald’s under construction in the southwest of France, loaded the debris onto trucks and tractors and carted it away. They were promoting their idea that French people should eat French food. The ringleader, Jose Bove, was sentenced to three months in jail but became an anti-globalization hero.

McDonald’s, which stands as a symbol of U.S.-led globalization, is like a punching bag nowadays. Here and there, its windows are smashed, its doors blocked and its walls covered with protest posters.

In “Jihad vs. McWorld,” Benjamin R. Barber, an American political scientist, puts forth his theory about the confrontation between globalization, represented by “McWorld,” and traditional values, represented by “Jihad.” The stronger the influence of globalization becomes, he said, the stronger the opposition to it grows. The article from 1992 eventually grew into a book of the same title.

There is plenty of evidence to illustrate this point, and critics of globalization have often said that they don’t want to be part of a cookie-cutter country where everybody eats Big Macs and drinks Starbucks coffee.

Today and tomorrow, Korea is hosting a major global event in Seoul in the form of the Group of 20 Summit. To guard against the possibility that violent anti-globalization rallies will break out, police are on the highest level of alert. They are being especially vigilant about McDonald’s and Starbucks outlets, which have in the past been the targets of angry demonstrations.

To be sure, globalization has caused harm in the world. But instead of screaming our discontent with the idea that the summit is a party for the have’s, I would hope that we could cool our anger and calmly discuss our ideas. That would be in the spirit of the summit, which is, after all, a forum for dialogue.