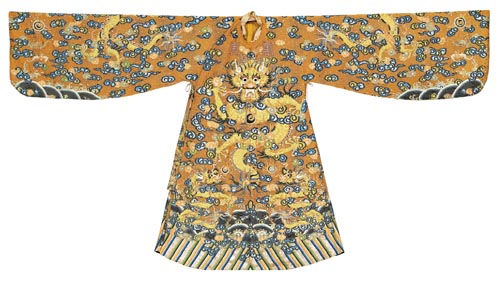 A replica of the ceremonial garment worn by the crown prince of the Nguyen Dynasty. Provided by the museum


When it comes to Vietnam, people often think of the Vietnam War, the Vietnamese dress ao dai, the conical non la hats or pho noodle soup. But dig a little deeper and you will find a rich culture that has surprising similarities to Korea and, more obviously, China.

These similarities are highlighted in an exhibition at the National Palace Museum of Korea that contains 165 relics from the Nguyen Dynasty as well as photos and video about the kingdom.

The exhibition is the result of a five-year project following culture exchange agreements signed by the Cultural Heritage Administration of Korea and the Ministry of Culture, Sports and Tourism of Vietnam in 2006.

The relics are provided by the Hue Royal Antiquities Museum, and the exhibition is supported by the Vietnamese Embassy in Korea and Vietnam Hue Remains Preserve Center. It runs through Feb. 16, after which it will move to Gyeongju from Feb. 28 to May 15. 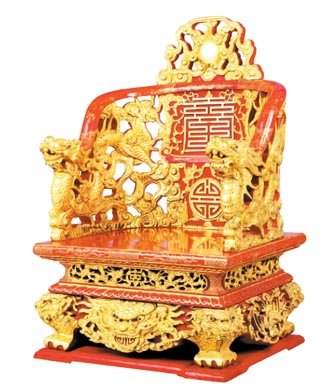 Until the 19th century, China’s Qing Dynasty (1644-1912) was the dominant power in Asia. But after the Nguyen family unified the northern and southern regions of what is today Vietnam in 1802, it came to dominate the Southeast Asian region.

The Nguyen family established an imperial state, calling it Dai Nam, and its power rivaled China’s. The Nguyen Dynasty (1802-1945) was the first dynasty to unify Vietnam and it was the last dynasty in Vietnamese history.

The Nguyen family built its imperial city of Hue in the middle of Vietnam and occupied the southern part of the land. Today, the city is a Unesco World Heritage site.

When you walk into the exhibition hall, one of the first things you see is the throne of the crown prince, painted in gold and red and adorned with carved dragon sculptures.

Dragons, phoenixes and the combination of red and gold were often used to express the dignity and independence of an imperial country not only in Vietnam but also in China and Korea.

The Nguyen Dynasty was greatly influenced by China, just as Korea’s Joseon Dynasty (1392-1910) was, and its royal palaces, furniture and household items seem to mimic those of the Qing Dynasty.

“It may seem like Vietnam copied everything from China,” said Park Su-hee, the exhibition and publicity curator of the National Palace Museum of Korea. “But in 19th century Asia, replicating the imperial culture of a dynasty like the Qing Dynasty meant that the two dynasties were equally powerful.” 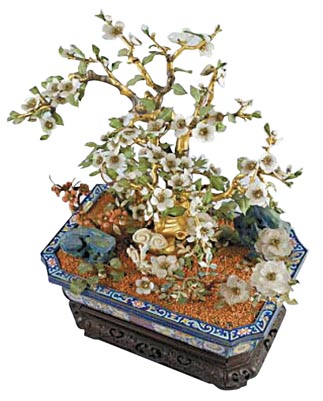 This decorative piece is a tree with jade leaves and copper branches set in an enamel base. Enamelware was a flourishing industry in the Nguyen Dynasty.

Some of the chinaware imported from the Qing Dynasty is on display in the exhibition, including soup bowls and table tiles.

The chinaware used in the palace in Hue, the capital, was specifically designed for the royal family of the Nguyen Dynasty but made by craftsmen in China.

China and Vietnam maintained a close relationship through this period, and the Nguyen Dynasty not only imported art from the Qing Dynasty but also adopted many of its cultural traditions and philosophies.

Confucianism was another strong influence from China that filtered into both Vietnam and Korea - a connection the exhibition aims to make clear.

Citizens of both the Nguyen and Joseon Dynasties paid tribute to heaven and their ancestors in elaborate rituals. In Korea, the royal shrine used for conducting rituals to past kings is Jongmyo.

The Nguyen Dynasty equivalent is Mieu Temple, which is within the imperial city.

The exhibition features a collection of objects used at Mieu Temple, including intricately crafted incense burners and candlesticks.

Also on display are royal garments, and again the similarities between Vietnam and Korea are striking. Many of the garments are embroidered with animals such as dragons or phoenixes, or plants, not unlike those of the Joseon Dynasty. These symbols represented power or conferred good fortune on the wearer.

“It would be interesting to compare the ritual utensils or costumes from the Nguyen Dynasty with similar relics from the Joseon Dynasty that are also on display at the museum,” said Park.

However, even though Vietnam and Korea share a similar heritage, they also have their own artistic traditions.

The Nguyen Dynasty excelled in gold and silver craftsmanship and produced exquisite enamelware, which was used in household items such as table tiles and roof tiles.

Another item of note in the exhibit is a wooden screen, which is representative of those used in entryways for privacy and also to guard against misfortune.

The wooden screen displayed in the exhibition is lacquered in red and gold. It is decorated with a writing brush and sword on the upper right and left sides to symbolize the strength of the country’s political and military power.

One of the more unusual items in the exhibit is a silver set containing a betel box, lime pot and spittoon.

The practice of betel chewing has long been an important part of Vietnamese culture.

The custom of offering betel leaves and Areca nuts, which are usually consumed along with betel leaves, to a bride’s parents in exchange for the bride to ensure an ideal marriage is based on an old folktale. The custom is still practiced today.

The exhibit also shows a game played by the Nguyen family that has similarities to a Korean game called tubo. In the Vietnamese game, the player bounces sticks off of a plate on the ground in hopes of getting them to land in a nearby vase. In the Korean game, the player aims directly for the vase.

*The exhibition continues until Feb. 6. Admission is free. The museum is open from 9 a.m. to 6 p.m. Tuesday to Friday and from 9 a.m. to 7 p.m. on weekends and holidays. It is closed on Mondays. In conjunction with the exhibition, the museum is holding two lectures on Vietnamese history and culture tomorrow and Dec. 16. Go to Gyeongbokgung Station, line No. 3, exit 5, and walk for five minutes. For more information call (02) 3701-7640 or visit www.gogung.go.kr.