Undercurrent of humanity in sculptures made of tires

Undercurrent of humanity in sculptures made of tires 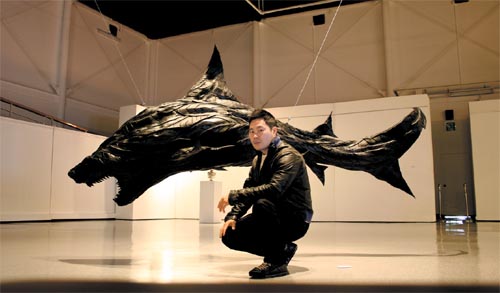 Ji Yong-ho sits in front of his “Shark 10” sculpture made of used tires, which is one of the art works displayed at “Korean Eye: Fantastic Ordinary” at Seoul Museum of Art’s Gyeonghui Palace Annex. The show has been moved to Korea Foundation Cultural Center, where it will run until Nov. 30. Provided by the artist


Black beasts were in abundance at the “Korean Eye: Fantastic Ordinary” exhibition, which came to Seoul Museum of Art’s Gyeonghui Palace Annex early this month, after being shown at London’s Saatchi Gallery and Singapore’s Arts House earlier this year.

There was a frighteningly intense energy coming from the tail of the shark hanging from the ceiling in the main gallery, and from the condensed muscles of the jaguar about to jump up nearby. Surprisingly, the beasts are made of used tires.

These striking sculptures are by Ji Yong-ho, 32, one of the 12 artists participating in the Korean Eye 2010 exhibit. Korean Eye promotes local artists by exhibiting their work around the globe. The show has now moved to the Korea Foundation Cultural Center, where “Jaguar” is among the works on display.

A closer look at the beast, which seems to be roaring fiercely, shows that its black eyes are unexpectedly quiet and melancholy.

“The solitude and sadness captured in a powerful exterior is a consistent theme in my work,” Ji said. “Rather than conveying verbal messages, my works depict a universal emotion that is hard to express in words.”

Like his sculptures, the artist himself has a tough look and muscular arms from cutting and assembling tires, but his eyes have a calm and serious look.

Ji said his work is inspired by the sad eyes of animal trophies. Human beings hang the trophies proudly on their walls, as if to proclaim that they have conquered a fearful beast, Ji said. But he wonders whether the beasts haven’t been sacrificed at the altar of human greed. His works seem to ask which is the most fearful.

But Ji said the sculptures in his “Mutant” series are not necessarily about the confrontation between human and animals. Rather, he says his works speak for the fragile and lonely men who have to struggle to survive in the jungle of contemporary society, pretending to be strong.

“What I really want to talk about through my work is humans,” he said. “I’ve been expressing that with animals and now I’ve moved to half-man, half-animal figures. Someday I’ll be able to make human sculptures as well.” 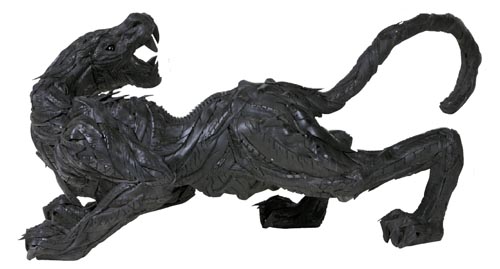 
Ji’s sculptures attracted a lot of attention at the Korean Eye show at the Saatchi Gallery, where the exhibit opened in July. Perhaps it is because the sculptures are visually strong but not overly conceptual, and are made of such unusual material.

They gained particular notice from Tim Miller, chairman of Standard Chartered Korea, which has supported the Korean Eye project, and Francesco Baragiola Mordini, who is in charge of international publications at Skira, a well-known Italian publishing company that published a book about Korean artists this year.

The works also garnered an enthusiastic response from viewers attending the Arco Art Fair Spain early this year, as well as at the artist’s shared exhibition with Yi Han-kwon at Hong Kong’s Causeway Bay Times Square this July and August.

Despite the sculptures’ seeming lack of nationality, a few Western critics have found the Eastern elements in his works.

“When I was studying at New York, my friends saw my work and talked about Asian circulation theory,” Ji said. “The tire, an inanimate object, originally comes from live rubber trees. Then it becomes waste and then it becomes a live organism after I’ve worked with it.”

To make the sculptures, Ji said he first makes a stainless steel skeleton and adds shredded used tires to the frame. During this process, a new idea may pop up, or an accident may take the piece in a new direction - improvising, which Ji said he appreciates.

He said he uses all sorts of tires - from tractors to bicycles. He chooses different tires depending on the forms and characteristics he wants to express. For “Shark,” a work with a strong sense of speed, Ji used tires from motorcycles and race cars.

Still, Ji said he is not too obsessed with the material itself.

“I use wasted tires only because it supports my concepts the best,” he said. “It is the best material to catch the powerful, dynamic, tough but elastic side of muscles. New tires don’t really work so I always use used tires.

“But if I’m trying a new piece with a different concept, I change the material according to the piece. For now, I’m planning to work on new concepts while continuing my current work. In fact, I have already been trying new materials for the new concepts.”

Ji is also considering mixing sculptures and painting. He said he loves sculpting but is also fascinated by the color he sees in paintings. He showed one of these works at a two-person exhibition with painter Kim Nam-pyo in September at the Gana Art Gallery.

Ji majored in sculpture at Hongik University and received his master’s in fine arts from New York University. Since then, he has become one of the most popular Korean artists outside of Korea. He sold a version of Shark in 2007 for $145,000 at an auction organized by New York-based Phillips de Pury & Company and saw all of his works sell out at his solo show at Taiwan’s Soka Art Center in 2009.

But this young, successful artist also has his own concerns.

“In Korea, when an artist’s works start to sell well in commercial galleries, nonprofit museums become reluctant to include the artist in their shows,” Ji said.

To be recognized by both entities in Korea, he says artists should first participate in residency programs run by public museums, then have larger exhibitions at nonprofit spaces, and finally put their work in commercial galleries.

“But I did not go down this path, because I became known at commercial galleries while I was studying abroad,” he said. “Outside Korea, museums and commercial galleries are well connected and they value the coexistence of artistic quality and commercial appeal. I regret that people here think the two must be inversely proportional. However, since it is museums that organize many of the high quality exhibitions, I would like to have a solo show in a Korean art museum someday.”

But Ji also pointed out there is an unwritten rule in Korea that solo exhibitions in museums are for artists over 40, or for those who are at least 35.

For now, he is turning his attention to Europe with an exhibition with Kim Nam-pyo in Amsterdam next year. Ji also said he is looking to hold solo shows in France or Germany.