Last week, Chinese forces broke through the ROK defensive line, only to be thwarted by British and American troops. 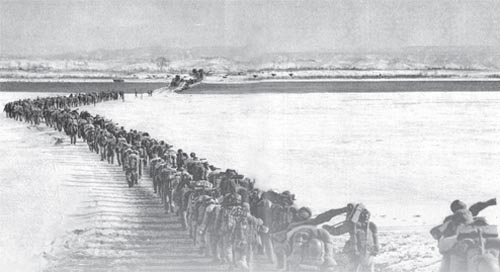 Chinese PLA troops cross the Amnok River and head toward the ROK defensive line. The PLA troops conducted their last major offensive in Inje and Hongcheon, Gangwon in May of 1951. [JoongAng Ilbo]


There have been plenty of accounts that falsely reported the Chinese People’s Liberation Army as coming down in droves and attacking Republic of Korea and United Nations troops without much of a plan. That could not be further from the truth.

The PLA not only relied on heavily outnumbering its opponent, but it also staged targeted attacks and effectively carried out precision missions.

At the Battle of Hyeon-ri, in Gangwon, in mid-May of 1951, an enormous number of PLA troops had gathered near our central-eastern defensive line. The PLA looked set to conduct its second wave of attacks only one month after its crushing victory over the ROK’s 6th Division at Sachang-ri.

This time, three North Korean divisions and 18 PLA divisions under the PLA 3rd Corps and 9th Corps assembled near the line. The North Korean contingent had been put together in haste after being defeated at the hands of the ROK and UN troops months earlier.

The U.S. 10th Corps, ROK 3rd Corps and my ROK 1st Corps were to take the incoming enemy troops head on. We were greatly outnumbered with the PLA boasting about 290,000 men in the area.

The attacks started on May 16 at approximately 4:30 p.m. It would turn out to be the PLA and North Korea’s last major assault. Having failed in its overall attempt to break down the allied forces’ defensive line, the battles involving the PLA that followed in the ensuing months never matched the grand scale of previous attacks.

On the day of the strike, the PLA and North Korean troops fired a barrage of shots from their artillery guns for approximately an hour before they made an advance with their infantry. It was clear that the operation was planned out thoroughly. 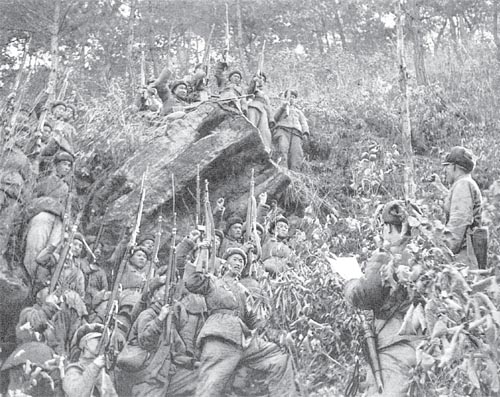 Chinese People’s Liberaton Army troops prepare for their second offensive in the spring of 1951. [JoongAng Ilbo]

We had to respect the Chinese for doing their intelligence work and figuring out in detail the location of the communication lines and outposts well ahead of its planned attack.

Because the PLA troops, supplies and firepower had dwindled somewhat since entering the war, they decided to focus on specific areas and decided on the weakest point in the link - the ROK 7th Division.

It wasn’t all bad news for the ROK 7th Division. The division was located in a favorable position and had the Soyang River in front and a steep hill at the rear. In addition, the UN troops had carried out air raids on the PLA troops for four continuous days leading up to the May 16 attack.

Then the ROK 7th Division was overwhelmed by six PLA divisions. There were so many troops rushing the lines, that the Koreans later said the sheer number of PLA troops seemed unreal. Although they mowed down what seemed like endless waves of Chinese, there was no end in sight.

It was the second major defeat within a month, but important lessons were learned.

The ROK Army was inexperienced and lacked a clear understanding of modern warfare. It wasn’t just the noncommissioned soldiers who lacked experience, but the commanders who led the troops were young officers. Their only experience was leading small Korean Liberation Army units as part of the independence movement against the Japanese colonial government.

Under the circumstances, it was inevitable that the young and inexperienced commanders would make mistakes in the heat of battle.

It was true that we were able to fend off the enemy in several battles with sheer determination, but such mental fortitude could only get you so far. These and other deficiencies surfaced along the defensive line. The Battle of Hyeon-ri clearly exposed weaknesses and the inexperience of the ROK Army.

Up until a week prior to the attack, the ROK Army had been planning on advancing with U.S. troops further north.

We were ill-equipped to make a quick transition from an attack mode to a defensive mode. We learned our lesson. It is important to reposition the troops and to re-establish communication lines if they are cut.

On a micro level, the experience taught soldiers how to overcome anxieties in the heat of battle. It was tough for sure, but it is the type of experience every soldier needs. I’m sure current ROK military forces could learn a great deal from participating in such a difficult battle.

Several unexpected events took place leading up to the Chinese PLA attack. On April 11, 1951, Gen. Douglas MacArthur, the chief of the United Nations Command in Korea, was relieved of his duties and Gen. Matthew Ridgway, the former commander of the U.S. 8th Army, was promoted to replace him.

Gen. James Van Fleet was, in turn, promoted as the new commander of the U.S. 8th Army.

The shift in power in the American command meant that General Van Fleet had the difficult task of leading his 8th Army to defend against the Chinese PLA as soon as he took over.

The general showed a lot of interest in Korea and its affairs in the post-war period. And in many instances he tried to handle matters in ways that would be in Korea’s best interest. He was in charge of defending Seoul. As such, the PLA failed to succeed in its attempt to penetrate the allied forces’ defensive line to get to Seoul and the western region.

Having tested U.S. troops and their firepower, the PLA soon shifted its focus to the eastern area. The attack in the western region might have been a decoy as part of an overall plan to attack the ROK controlled defensive line along the east.

Our intelligence provided an abundant amount of information to U.S. troops about the shift of the PLA troops to the east. It is my guess that General Van Fleet did not respond to the reports because he was focused more on protecting Seoul and saw it as his foremost priority at the time.

The PLA could now focus on penetrating weaker areas defended by the ROK Army and go on to shake up the entire defensive line, including those manned by the Americans in the west. The PLA had a solid plan but failed to continue its dominance over ROK and U.S. troops because the PLA met fierce opposition in the Daegwallyeong area in Gangwon. The U.S. troops did not let up and mustered a fierce counterattack, dealing significant damage to the PLA.

In the aftermath of the second PLA offensive in mid-May, PLA troops did not engage in any more large scale battles against U.S. troops. The PLA would go on to realize that it would be impossible to win the war in Korea. The war had seen many bloody battles for approximately a year and finally hit a turning point after the Battle of Hyeon-ri.