‘The Warrior’s Way’ flashes its mettle

‘The Warrior’s Way’ flashes its mettle 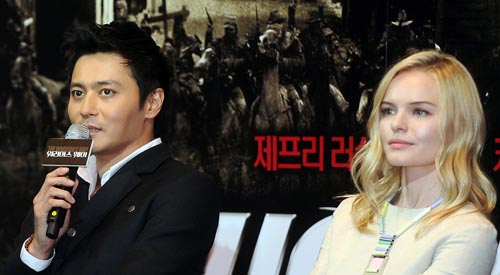 
The highly anticipated film “The Warrior’s Way” was finally released to local media yesterday at a press screening in southern Seoul.

Led by renowned Hollywood producer Barrie M. Osborne, whose works include “The Lord of the Rings” trilogy and “The Matrix” (1999), this computer graphic-heavy Hollywood film has created a great deal of buzz because of its stellar creative team, which includes art director Dan Hennah, who participated in the 2005 version of “King Kong,” and visual-effects art director Christian Rivers, who worked on The Lord of the Rings.

The global cast of A-list actors includes American actress Kate Bosworth and Australian actor Geoffrey Rush. Bosworth plays Lynne, a lady who dreams of killing her enemy, while Rush portrays a former cowboy who is now a drunk.

But what makes this film special for Korean moviegoers is the presence of Korean actor Jang Dong-gun, who is making his Hollywood debut in this film.

The film is directed by first-time Korean-American filmmaker Sngmoo Lee, who said the most difficult part of the production process was creating a unique setting entirely through the use of CG techniques.

“I didn’t want to remind viewers of a particular country, because this is an action fantasy film,” he said. “We had to create a fantastic and dreamy world, but it’s all make-believe.”

The film tells the story of a lonely swordsman (Jang) who hides in a small town and learns how to build a relationship with the townspeople.

Even though most people may assume that having to speak in English is the most difficult part of Jang’s new role, Jang said the hardest part was starting all over again in Hollywood,

“Of course it wasn’t easy to act while speaking a different language, but the more challenging thing was that I had to prove myself to people who have no idea about me and what I can do,” Jang told reporters at the press screening.

Jang is not the first Korean actor to cross into Hollywood. Lee Byung-hun played a supporting role in “G.I. Joe: The Rise of Cobra” in 2009 and is also scheduled to appear in the sequel. Singer-actor Rain appeared in “Ninja Assassin,” also in 2009.

But whereas his fellow actors were cast in supporting roles, Jang is the star of this film, which was reported to have a production budget of $100 million. That means the pressure is all on him.

It also probably doesn’t help that the film has a rare scene in which an Asian man kisses a Caucasian woman.

While that scene, and Jang’s role, could change perceptions of Asian men overseas, some say that Asian actors have a long way to go before that happens.

“Jackie Chan is a huge star in Hollywood and his image as a comedic and action star is what Westerners expect of Asian men - whether they are Chinese or Korean,” said Yu Ji-na, a movie critic and film professor. “There is this fixed idea of what an Asian actor can do. If Korean actors want to appear as something other than a warrior, it’s going to be very hard.”

“I think there should be a wider range of roles for Asian men,” Jeong said. “To change the stereotype that Asian actors face, Korean filmmakers should try to produce a variety of films.”

The Warrior’s Way opens on Dec. 2 at theaters nationwide and on Dec. 3 in the United States.