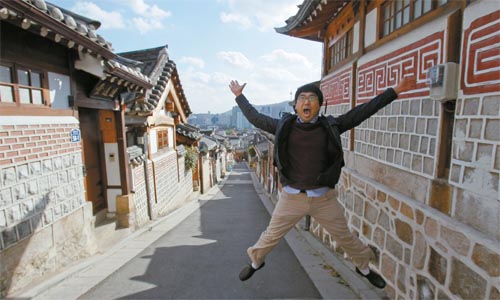 Go Doo-Hwan, the owner of Gonggam Manse travel agency, is part of a new generation of travel professionals whose goal is to provide travelers with a greater understanding of the cultures they visit.By Shin In-seob


When Go Doo-hwan, a senior at Gongju University, got out of the military in April 2008, he was looking for something to do. He said he didn’t want to go the usual route of working for a large corporation, and he wasn’t particularly interested in going back to school right away. So he signed up for a volunteer program in Thailand, where spent a year helping build a bio-energy plant in Chiang Mai.

But it was when he went to the Philippines a year later that he finally found his true career. There, he discovered he had a passion for travel and a desire to help the communities he visited. So he began formulating the idea for a travel business that would marry the two interests.

After he returned to Korea, Go set his ideas in motion while also returning to school to finish his degree.

Now, he is part of a new generation of travel professionals in Korea who are changing the way Koreans think about traveling with eco-cultural travel packages designed to give tourists a way to reduce their carbon footprint, boost the economy of the places they visit and interact with communities that don’t get as much attention as the main tourist spots.

The new trend is called gongjeong in Korea, which means “fair and right.”

“While I was in the Philippines, I learned that many people travel without an understanding of the history and culture of the places they visit,” Go said. “And that’s why I started this business. I also wanted to do something that would be beneficial to local residents.”

The business he started is a travel agency called Gonggam Manse, an acronym that means “a world made by people who are touched by the power of fairness and doing the right thing.” It promotes gongjeong travel, which Go jokingly describes as an “entertaining, but inconvenient” form of travel.

He officially registered the travel agency as a business in April this year, but structured the agency more like a club than a formal operation.

Gonggam Manse runs an Internet forum instead of an official Web site, and Go chose six members of the forum to help him build the business. Two of the members - Lim Il-sang, 28, and Jo Soo-hee, 23 - are on the company’s payroll. Each one earns just 300,000 won ($266) per month.

Go considers more of a project that challenges society than a profit-making venture and said he cannot yet even begin to estimate the line between profit and loss. Since the business started, it has recorded 70 million won in sales.

Gwon Young-doo, director general of the Bukchon Dongyang Cultural Museum, gives a piece of calligraphy to Bae Sang-won, one of the participants on the Bukchon tour. By Choi Myeong-heon

Go’s first tour venture was a seven-night, eight-day trip to the Philippines, where tour participants help rebuild rice paddy fields in conjunction with Save the Ifugao Terraces Movement (SITMo), a local NGO.

SITMo is based in the northern part of the country in Ifugao province, on the island of Luzon, which is famous for the Banaue Rice Terraces, a Unesco World Heritage site. The group is committed to supporting sustainable agriculture and energy initiatives as well as social development.

Although their main goal is to help rebuild the paddy fields, tour-group members also go trekking and are encouraged to interact with the local community.

Tour group members are also active participants in how the tour program develops in the future. Before going home, they hold a meeting together to evaluate their experience and discuss ways the program can be improved.

Go spent a year in the Philippines laying the foundation for the program. In January, he launched a pilot program for 16 college students, which allowed him to test his ideas for the business.

In addition to the Philippines program, the company also organizes an eco-cultural weekend walking tour in Korea. The tour takes visitors around the Bukchon neighborhood near Gyeongbok Palace in northern Seoul.

To lessen their carbon footprint, participants walk to each tour location - including Gahoe-dong, Jae-dong, Gye-dong and Samcheong-dong - instead of using cars, taxis or buses. 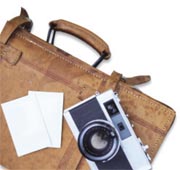 The environmental theme is also carried into another aspect of the tour because a portion of the profits from the 88,000 won per person are donated to environmental organizations.

The Bukchon trip started in March and has attracted 100 visitors in the seven trips it has organized since then.

We joined a recent trip that started on Nov. 6.

Our trip was led by Go, but a group of Bukchon-area experts were invited to lead smaller segments of the program.

On the first day, we were joined by Ok Seon-hee, a movie critic and author of the guidebook “Bukchon Tamnik.”

Participants then sleep the night at Hanok Seodang, a school located within the Bukchon Dongyang Cultural Museum, and are asked to bring their own cups, toiletries and towels. The museum, however, does provide delicious home-cooked meals prepared by Go.

On the second day, we met up with Gwon Young-du of the Bukchon Dongyang Cultural Museum, who led us through Gahoe-dong 31 Street, which was featured in the KBS program “One Night, Two Days;” Hwagae-gil, which offers a panoramic view of Bukak Mountain and the prime minister’s official residence; and Samcheong-gil, which has a reputation for its lively nightlife.

The schedule is less structured than most, which gives visitors plenty of time to take in all the sights, and the guides offer a wealth of information along the way.

The leisurely schedule was perfect for Bae Sang-won, a fourth-grade student at Jamdong Elementary School in Seoul, who also went on the tour. As we strolled along a street lined with hanok, Korean traditional houses, Bae was full of questions.

“Do people really live in these hanok, mom?” Bae asked.

Next, Go led us into the Bukchon Dongyang Cultural Museum, where we were invited to try our hand at calligraphy. We were given traditional brushes and ink and could write either a personal life motto or folk tale on a fan or T-shirt.

It was here that Go described his philosophy about travel.

“Just taking pictures in front of a famous architectural site is not enough,” he said.

For Go, it is more important that people engage with their environment and try to learn about their surroundings. Tour groups are small, allowing participants an opportunity to maximize their experience.

“Fair travel is not for a huge number of people,” Go said. “And participants appreciate that because this is an largely an educational program. They get to think about a lot of things as the trip proceeds.”

It’s a lot of work for Go, but he hopes his efforts will lead people to think differently about the world in which they live.

“I want to believe that in the course of doing my work, I can eventually bring about changes in society,” he said.