Getting a grip on the centrifuge subterfuge

Getting a grip on the centrifuge subterfuge 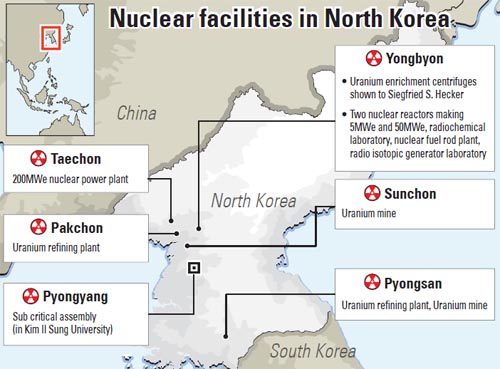 It appears that North Korea now has a facility capable of enriching uranium for a nuclear bomb, according to observations by a U.S. scientist, and the reclusive state is thought to have built the facility secretly with outside help, ignoring international sanctions forbidding it from engaging in acts related to nuclear arms proliferation.

The 2,000 centrifuges that the U.S. scientist, Siegfried Hecker, saw during his trip to North Korea earlier this month bear a striking resemblance to the nuclear programs in Pakistan and Iran.

With North Korea’s choice to use centrifuges to enrich uranium to fuel its nuclear weapons, an axis of states that use the technology has now emerged with North Korea, Pakistan and Iran.

Centrifuges are the preferred technology for nuclear weapon fuel processing, as producing plutonium, which is the other fuel, can only be done through nuclear reactors, a process that’s difficult to hide due to the bulk of the facilities and easily detectable radiation. Centrifuges are easier to maintain and move, and they use less energy, which have authorities concerned about North Korea relocating the machinery shown to Hecker.

The centrifuges were seen at Yongbyon, where Hecker also said he saw a new building under construction to house a light-water reactor.

Suspicion centered on Pakistan after analysts were convinced that North Korea had foreign help in building the uranium enrichment facility. 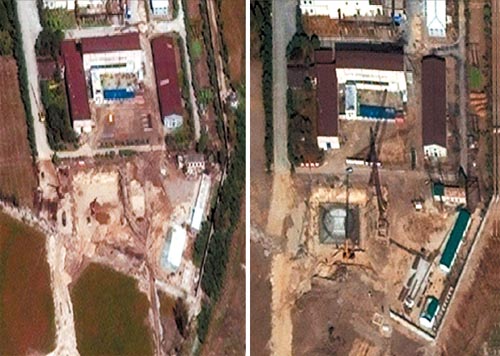 Two satellite images made available by DigitalGlobe show the Yongbyon nuclear complex on Sept. 29, left, and on Nov. 18, right. The later image shows a rectangular structure being built, with two cranes visible. [AP/YONHAP]


Abdul Qadeer Khan, mastermind of Pakistan’s nuclear program, which was based on gas centrifuges, said in 2008 that Pakistan had given centrifuges and their blueprints to North Korea between 1998 and 2001, possibly in return for missiles. North Korea’s program to enrich uranium is thought to have started in 1998.

Khan, who is a renowned figure in his country for creating Pakistan’s first nuclear weapon in 1998, was under house arrest until last year for his confession in 2004 that he was solely responsible for spreading nuclear technology to Iran, North Korea and Libya. The Pakistani government denied they were ever involved in any of Khan’s acts of proliferation.

The Pakistani scientist also said that North Korea had sold Pakistan shoulder-launched missiles in 1999, and that he was present at the moment of the purchase. North Korea has denied any nuclear involvement with Pakistan since 2002.

According to a report on his North Korean visit that Hecker released on Saturday, his North Korean guide denied that the centrifuges were of Pakistani provenance and said they were manufactured domestically and based on designs from the Netherlands and Japan.

Hecker’s report said the North Korean centrifuges, which had steel rotors, were “most likely P-2 centrifuges.” P-1 and P-2 centrifuges were developed by Pakistan’s nuclear program. If the Pakistan-North Korea link ended in 2002, it is possible North Korea imported the necessary materials from another country while using designs from Pakistan, Japan or the Netherlands.

North Korea was reported to have attempted to purchase maraging steel from a Russian company through its ambassador in Pakistan. Maraging steel is an iron alloy known for its strength.

Experts are now saying that if North Korea does possess the power to produce its own centrifuges, it may result in a new wave of nuclear proliferation.

“The centrifuges that Hecker describes in his report are closer in size to the P-1, but if they used iron alloys, it may be a new North Korean model that could mean they have succeeded in developing advanced centrifuges,” said Lee Chun-geun of the Korea-China Science & Technology Cooperation Center.