Winds of destruction, winds of deceit

Winds of destruction, winds of deceit 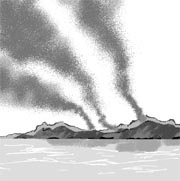 The first order King Gojong gave when he was enthroned at the age of 12 was, “Execute the roasted chestnut peddler in Gye-dong.” When the bewildered courtiers asked why, the king said, “I asked for a chestnut, but he didn’t give me one. What bad behavior!” In the end, the king gave the peddler a pardon because his royal subjects pleaded with him to be generous to the poor man.

“The wind of money” was blowing from a popular seasonal fish market that had opened on Yeonpyeong Island at the time. Jeong Mun-gi, the author of “A Study of Stone-head Fish of Korea,” wrote in 1939 that “hundreds of fishing boats gathered off the coast formed an island of boats, and the bonfires reflecting off the surface of the sea water was extremely beautiful.”

The “stone-headed fish” of the song are croaker, which were popular in the new Yeonpyeong market. The nickname comes from the fact that croaker have strong bones in its head. At that time, the seasonal fish market had 300 officially registered restaurants, 53 food stalls, one cafe and 95 registered hostesses. In reality, however, there were about 500 unregistered hostesses and it was even said that there were 50 Japanese hostesses. The expression that says one can “make enough money for a year in three days time” originated there.

Whether overfishing dried up fish resources, or the fish’s migration route was changed due to global warming, we do not know. But the haul of fish decreased to 1,348 tons in 1972 and 36 tons in 1976, from 10,000 tons in the 1960s. As the catch dwindled, fishermen left the island. When it was driven to the brink of being abandoned, it was saved by a surge in blue crab. These days, competition among fishermen from South Korea, North Korea and China is so high that island residents lament in frustration that there is no more blue crab, just lots of Chinese fishing boats.

A new wind is blowing toward the island now, this time a dangerous one perfumed with the smell of gunpowder. North Korea, as usual, has turned on us - even though it was the one in the wrong.