The great dilemma of returning fire

The great dilemma of returning fire 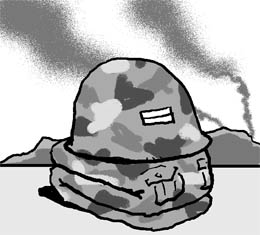 In early 1951, when Winston Churchill was the leader of the British opposition, he told his fellow members of Parliament, “It is lucky for me that the Korean War broke out now. We have no choice but to fight, but if I were still the prime minister, I would have been called a war maniac. I would have been the one to send young Brits to the battlefield. The omniscient God did a favor for me.” Even the heroic leader did not find it pleasant to make the decision to go to war.

No citizen in the world welcomes war. That’s why peace has always been an ace in the pocket in American presidential elections. The candidates knew too well that they would not be able to keep their election promises, but they pitched antiwar slogans nonetheless. President Woodrow Wilson’s successful re-election campaign in 1916 had the slogan, “He kept us out of war.” Twenty-four years later, Franklin D. Roosevelt was re-elected with the same campaign promise. Of course, the U.S. ended up in both WWI and WWII.

It is only natural that former U.S. President George W. Bush is one of the least-loved presidents after starting wars in Afghanistan and Iraq. The two wars are criticized for lacking justification. The United States relies on an all-volunteer military, but only 2 percent of congressional representatives’ children are enlisted. During the Vietnam War, half of the graduates of Princeton University served in the military. In 2006, only nine Princeton graduates participated in wars. If the privileged class shared the sacrifices of war with the poor, America might not have started its wars, argued American philosopher and Harvard University professor Michael J. Sandel.

Korea requires its citizens to serve in the military, but its far from a fair system. The president, the prime minister and members of the cabinet did not fulfill their military duty.

The president was concerned about an escalation after North Korea turned Yeonpyeong Island into an inferno on Tuesday. His concern might be a by-product of not having served in the military.

Many parents and girlfriends of conscripted soldiers are extremely worried after the latest incident. The government cannot proudly declare that South Korean forces are eager to risk their lives to fight against the North.

So what can they do to resolve the dilemma? We cannot continue to allow North Korean provocations, but we also cannot start a war.