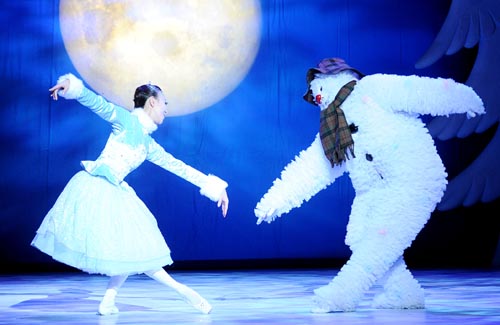 Performers dance at a press preview of “The Snowman” at Hoam Art Hall last week. The musical, based on the book by Raymond Briggs, is about the adventures of a boy and his snowman. The Korean language version of the musical will run through Dec. 31. See THEATER, below. [NEWSIS]

Today: Inessa Garante, who is originally from Latvia, became famous after her debut in 1995 with Giulio Caccini’s “Ave Maria.”

In this performance, Garante will sing “Lascia ch’io pianga,” from Friedrich Handel’s opera “Rinaldo” and “Vissi d’arte, vissi d’amore” from Giacomo Puccini’s opera “Tosca,” among others.

Pop singer Kai will join Garante for a duet of “Libiamo” and “Time to Say Goodbye” from Giupseppe Verdi’s opera “La Traviata.”

Clayderman performs in Seoul at 8 p.m. on Dec. 4 at Goyang AramNuri Arts Center and on Dec. 9 at Kyunghee University’s Pyunghwa Theater.

Dec. 4: Cellist Yang Sung-won and the Prime Philharmonic Orchestra will play pieces by Dvorak and Tchaikovsky in this year-end concert. The program includes Dvorak’s Slavonic Dance No. 1, Op. 46-1, and Tchaikovsky’s Symphony No. 5 in E minor, Op. 64.

Dec. 7: Handel’s “Messiah,” one of the most well-known religious works in the Western choral canon is the centerpiece of this concert.

Dec. 10 to Jan. 15: The legendary 72-year-old guitarist known in Korea as the godfather of rock presents a month of concerts. He chose Daehangno Small Theater because it was where he performed in 1960 at the height of his career. He will perform his hits “Lover in the Rain,” “One Cup of Coffee,” “My Love,” “Beauty” and more.

Today to Saturday: This performance tells the history of Seoul through the story of two young lovers. The story begins during the Joseon Dynasty, when the city was known as Hanyang, and moves to the Japanese colonial period, when the city was renamed Kyungsung. Eventually the performance gets to the present day.

The production is directed by Park Sae-won, a former opera singer who was awarded the Okguan Cultural badge by the government in 1985.

Dec. 18 to 26: Actor Bae Su-bin (SBS’s “Shining Inheritance” and MBC’s “Jumong”) stars in this show about the life of legendary poet Yi Sang.

As part of the program, company members Yu Su-jeong and Kim Cha-gyeong will sing the folk song “Boryeom”; Wang Gi-seok, Pak Ae-ri, and Kim Hak-yong perform a scene from a changgeuk opera (traditional Korean opera); and Ahn Sook-sun will sing part of “Cheong,” which is based on “Simcheongga,” one of the five surviving stories in the pansori tradition.

Dongkuk University Station, line No. 3, exit 2; From there, take the shuttle bus in front of Taegeukdang.

To Saturday: Begun in 1991 as a platform for work by emerging and established artists, the art fair features 400 works by 70 artists and the participation of 18 galleries in the Cheong-dam area. Some of the galleries involved include the PKM Trinity Gallery, Gallery Mee, Gallery Seorim and Park Ryu Sook Gallery. Restaurants and designer shops will also hold exhibitions.